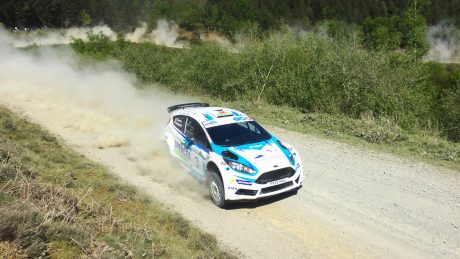 This weekend’s Plains Rally witnessed a masterful performance by Tom Cave. Having led from the start, the Aberdovey driver, together with his co-driver James Morgan from Hirwaun, they won six of the event’s seven stages to take victory by a convincing margin of 27-seconds.

With an eight-week gap between the third and fourth rounds of the MSA British Rally Championship – the Pirelli Carlisle Rally and the RSAC Scottish Rally – Tom, James and the Spencer Sport team, who prepare the Fiesta R5 that’s taken them to three top-four BRC results this season, took the decision last week to enter the fourth round of the BTRDA Rally Series. And they were very pleased they did!

This seven-stage event that comprised 45-competitive miles would be used to develop set ups for the car and to test the Michelin tyres in competitive conditions, without the pressure of having to score championship points. Plus, with it Tom’s ‘home’ rally and his subsequent familiarity of the stages, entering this event was a logical choice.

Bright and sunny weather was the order of the day as the 143 crews arrived in Welshpool for the start of the 50th running of the Plains Rally on Saturday (14th May). The conditions meant that the stages in the North Wales Forests were dry and dusty, but with Tom and James seeded at number three, poor visibility caused by the dust was unlikely to be an issue.

In fact, there were no issues whatsoever for the first run through Gartheiniog Forest, with Tom and James taking nine-seconds off their closest rivals, Julian Reynolds and Patrick Walsh in a Ford Focus WRC. And, whilst the tables were turned by two-seconds on stage two – Dyfi East – Tom and James were fastest again by four-seconds through SS3, Dyfi West. Consequently, when the crews arrived at the lunchtime service halt, Tom and James had extended their advantage to 11-seconds.

The next three stages were a re-run of the first and Tom commented that conditions were ideal: the Fiesta was running perfectly, they had been re-seeded to run as the first car on the road and the sun was still shining! The afternoon’s trio of stages – plus the addition of Pantperthog at the end – could not have gone better. In fact, following the rally Tom admitted that he and James were smiling all the way through the final stage.

A faultless performance from the crew, the Spencer Sport Fiesta and the Michelin tyres resulted in Tom and James crossing the finish line in Welshpool having pulled out a 27-second advantage. It was an impressive result and signified the first-ever outright victory for the Spencer Sport team.

“I haven’t enjoyed a rally as much as this for a long time”, said Tom at the finish. “We entered the event to work on set ups and to test the Michelin tyres in competitive conditions – as well as make sure we kept ourselves match fit during the gap between BRC events. In fact, everything went so well, we quickly found ourselves in front and I’m delighted to have provided Spencer Sport with its first overall victory and to have won my home event.

“It’s clear from this result that all of us in the team are doing the right things and if we can continue the momentum into the next round of the BRC, then we’ve achieved what we wanted to achieve this weekend. I therefore have to thank Spencer Sport for providing me with such a fantastic car. It never missed a beat throughout the rally and also thank James for his work and support inside the car.”

The next event for Tom, James and the Spencer Sport team is the RSAC Scottish Rally that starts and finishes in Dumfries on 25th June.

It was another impressive performance by Tom Cave and his co-driver James Morgan at the weekend, when they scored their third top-four MSA British Rally Championship result of the season in as many events, by finishing fourth on round three: the Pirelli Carlisle Rally. Driving the Spencer Sport Fiesta R5, Tom – from Aberdovey – was once again matching the times of the world-class drivers around him and in doing so, kept his BRC title hopes well and truly alive.

The Pirelli Carlisle Rally featured four stages on Saturday afternoon followed by another three on Sunday morning, with all of the event’s 74 competitive miles taking place in the infamous Kielder Forest. It’s an area renowned for the challenges it presents to cars and crews, with the fast and technically demanding gravel roads possessing their own distinctive character.

Following a third place on the Mid Wales Stages in March, followed by a fourth on the Circuit of Ireland three weeks ago, Tom and James went to this weekend’s rally aiming for another top result.  However, with the caliber of the crews they were up against, they knew it would be no easy task.

Their expectations were realised as early as the opening stage, when it was clear that pace at the front of the field was going to be fierce and they emerged from SS1 in fifth place. It was a solid start, but both Tom and James knew there was more to come.

They kept the pressure on and, when rally leader Elfyn Evans dropped back following a puncture on stage three, they moved up to fourth. The final stage of the day served to maintain the status quo, when the top six crews beat the bogie time, meaning that all were accredited with exactly the same stage time. Consequently, organisers decided to add a series of chicanes into Sunday’s route in order to slow down the cars and attempt to avoid the bogie times being beaten.

Adding to the changes for Sunday was the onset of rain, the wet stages providing crews with a greatly reduced level of grip from that of Saturday. With their Michelin tyres working well in the conditions, Tom and James moved up to third in the first of the day’s stages. But another good run in the next stage was unrealised, when the top 13 crews managed to beat the bogie time again – resulting in the leading positions remaining unchanged.

It was now all down to the final stage – a 16-mile run through Chirdonhead – and, with Evans now on a mission to make up time following his Saturday puncture, Tom and James knew they would need a clean run to remain in a podium position. Everything was going according to plan until two-miles from the end, when a small overshoot when negotiating one of the organisers’ newly-added chicanes saw a few seconds lost – the subsequent delay allowing Evans to edge past and snatch third place behind Matthew Wilson in second and Fredrik Ahlin in first.

Whilst this final turn of events may have appeared frustrating, Tom and James remained pleased with the result, particularly against such tough opposition. Consequently, their performance was praised by the Spencer Sport team and at the finish, a philosophical Tom said:

“Overall I am very happy with the outcome of the weekend. To finish fourth against such a high level of competition is a good result. Added to this, James and I have continued to develop our partnership, plus I also learnt a lot more about the Fiesta.

“I really have to thank the Spencer Sport team for giving me such a reliable and competitive car. It never missed a beat throughout the rally. The Michelin tyres worked well in the differing conditions and we’re now in a great position for the rest of the season.”

The next event for Tom, James and the Spencer Sport team is in eight weeks time, when the MSA British Rally Championship heads even further north for the Dumfries-based RSAC Scottish Rally, which takes place on 25th June.