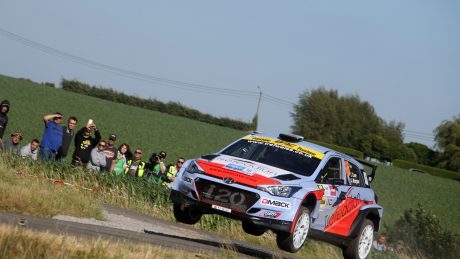 Following his participation in this weekend’s Ypres Rally, the fourth round of the Prestone MSA British Rally Championship, British rally driver Tom Cave is pleased to announce that he is to enter this year’s Rally Finland driving a New Generation Hyundai i20 R5. For Aberdovey-based Tom and his co-driver James Morgan from Hirwaun, this classic event in the FIA World Rally Championship calendar will represent their first WRC outing in the Hyundai.

A great start to the Belgian event on Friday evening for the Welsh pair saw them rise from fifth to third of the British Championship crews during the eight-stage opening leg. They also held a position of 10th in the overall event, an impressive performance with this their first-all asphalt rally in the Hyundai after two previous gravel outings on the Pirelli and Scottish Rallies.

With a number of competitors caught out by the unforgiving West Flanders roads, in contrast Tom and James had dialed themselves in perfectly and consequently increased their position by one in both categories on Saturday morning. Whilst holding a position of 2nd of the BRC runners and 9th overall, what was later found to be a fuel related issue meant that stage 11 was to be their last of the weekend.

Once again, the timesheets had shown that the combination of Cave, Morgan and the Hyundai are a front-running package. Following the event, Tom said:

“Of course, after such a promising start it’s disappointing not to get to the end of the rally – especially as we had a great chance of a podium result – if not winning. The car performed really well and I was pleased that I felt as much at home in it on tarmac as I do on gravel.

“We completed the first half of the rally with no issues whatsoever and it provided us with excellent experience of the car on asphalt. I therefore take a lot of positives away from the event.”

Due to other Hyundai crews suffering accidents in Belgium, it has meant that a car cannot now be made available for Tom to participate in this week’s Goodwood Festival of Speed. He and James will now focus their attentions on Rally Finland, which takes place from 27th to 30th July, when they are determined to deliver the result they deserve:

“It’s great to have been able to put together a package for our first WRC outing in the i20 R5 . The last time I competed in Rally Finland was in 2015 and on that occasion I won the DMACK Drive Trophy. It’s an event that I enjoy and it suits my driving style, so it’s great to have the opportunity to now do it a competitive R5 car.” 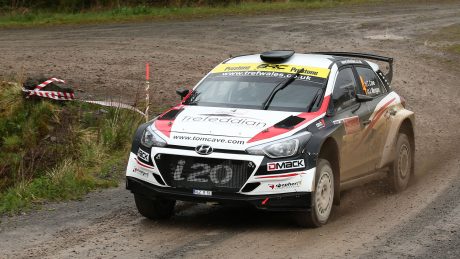 Following his two previous outings in the car, it is now confirmed that Tom Cave will drive a New Generation Hyundai i20 R5 on the fourth round of the Prestone MSA British Rally Championship, the Belgium-based Ypres Rally on 23rd & 25th June. It is also confirmed that the Welshman from Aberdovey will compete in the same car at the Goodwood Festival of Speed a week later.

After an impressive display of speed during the early stages of the Pirelli and Scottish rallies, rounds two and three of the British Rally Championship, Cave is pleased to be continuing his association with the Hyundai for the two forthcoming events:

“It’s great to be back in the Hyundai for the next round of the Championship. Having won every stage we’ve started in the car, it’s clear that it has the pace to win, so it’s going to be exciting to drive it competitively for the first time on asphalt.

“Because of the way our campaign is structured this season, we can only confirm each event as it gets closer to the day, so it’s great to be able to announce two events together this time. Of course, I’m hoping to continue to drive the Hyundai for the rest of the season and really show what the car is capable of.”

The Ypres Rally represents the first of three all-asphalt events in the British Rally Championship season and the first time Cave and his co-driver James Morgan from Hirwaun, will have completed on a non-gravel surface in the Hyundai. Held over closed public roads in the West Flanders area, the event also marks the first time the British Championship has ever featured a point-scoring round outside the UK, apart from the Circuit of Ireland that used to include stages in the Republic.

As soon as the car returns from Belgium, it will be re-prepared and converted back to gravel specification in readiness for the Goodwood Festival of Speed. This globally famous occasion that attracts the best names in motorsport from all over the world, features a specially constructed rally stage on which Cave has been invited to compete by the event organisers.

“It’s a real privilege to be invited to take part in this prestigious annual event. I’ve competed at the Festival of Speed before and it’s a great experience, so I’m delighted that I’m going be showcasing the i20 R5 in such a high profile environment.”

The car will be prepared and run on both occasions by Dom Buckley RSC.