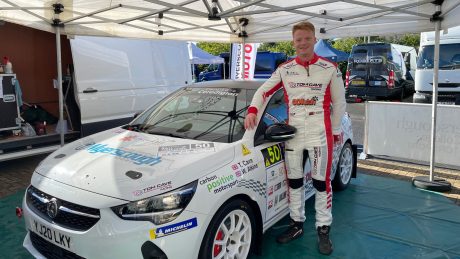 Following a successful outing driving a Vauxhall Corsa-e in the Get Connected Rali Ceredigion at the beginning of September, Aberdovey’s Tom Cave has been invited to compete in the final round of the ADAC Opel e-Rally Cup, the 3 Städte Rallye (3 Cities Rally), by the car’s owners Myerscough College & University Centre.

Taking place between 13th and 15th October, the rally is unique as its route takes competitors into three countries: Bavaria, Austria and for the first time this year, Czech Republic. The event represents the seventh and final round of the only one-make rally series in the world for fully electric vehicles, consequently attracting a great deal of attention from the sport’s governing bodies, manufacturers and event organisers who are looking at how motorsport’s future can become more sustainable.

Students from Lancashire-based Myerscough College and University Centre are first-time visitors to Germany when they will support their car on this, the final round of the ADAC Opel e-Rally Cup as part of their Motorsport Competition Car Technology course. Following the successful appearance on Rali Ceredigion, team manager and lecturer at Myerscough College Simon Moss invited Tom to drive the car on the 3 Städte Rallye.

“We were very pleased with the way things went on the Rali Ceredigion, so when the opportunity to take the car to the final round of the ADAC Opel e-Rally Cup came up, I had no hesitation in asking Tom if he was available to drive the car.” explains Simon.

“With the experience of Tom and his co-driver on this occasion Dale Furniss, we are hoping they can compete with the front runners in the series and if we could come away with a podium finish it would be a great way to end the season for the students and the College. It would also serve to draw attention to what we’re doing and showcase how alternatively powered vehicles can be used for motorsport.”

Tom is equally as intrigued about his trip to Germany:

“It’s great to be invited to drive the Corsa-e again. My previous outing in the car was an interesting and enjoyable experience, albeit different to what I’m used to. However. I’m very pleased to be involved with what is clearly a very significant and important innovation in the sport that could shape the future of rallying and its sustainability for years to come.

“Whilst I’ve not taken part in this rally before, I’m hoping that my previous overseas outings will serve me well, although I’ll be up against drivers who have a far more experience of driving the Corsa-e. I’m fascinated to see how things go, especially as unlike Rali Ceredigion, I’ll be competing against others in the same machinery and there’s the infrastructure in place for charging the cars between the stages.”

Following a pre-event shakedown on Thursday (13th October), the 3 Städte Rallye gets underway from Waldkirchen in Bavaria at 14.30 on Friday with six stages before the overnight halt. Saturday sees another eight stages before the finish at 18.00 in Breitenberg, also in Bavaria. The 14 stages combined provides competitors with a total of 168.5 kms crossing the borders of Germany, Austria and the Czech Republic.