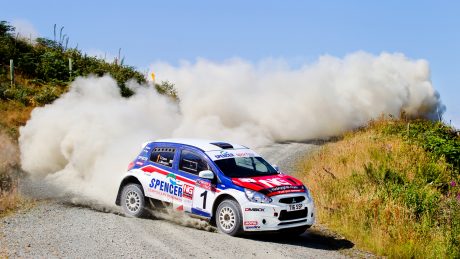 Tom Cave and James Morgan showed they had lost none of their former pace, when they recorded the fastest time on the first of eight stages on Saturday’s (14th July) Nicky Grist Stages Rally. Following a day long battle for the lead, they went on to cross the line in second place. But having reached the finish, their convincing podium position was denied when, due to an admin oversight by the co-driver, the Welsh pair were disqualified for infringing an event regulation.

After a successful test in the Spencer Sport Mitsubishi Mirage last week, Tom was more than ready to make his return to the stages in a R5 specification car following a nine-month sabbatical since he and James finished third in the WRC2 category in October’s Wales Rally GB.
Saturday’s event featured a loop of four stages on the gravel roads on and around the Epynt Military Ranges in the morning, followed by the same loop of four in the afternoon. Seeded at number one, things started perfectly for Tom and James. In the dry and dusty conditions, they set the fastest time on the opening stage and consequently led the rally by two seconds, ahead of current British Rally Championship leaders Matt Edwards and Darren Garrod in a Fiesta R5.

During the following three stages before the lunch time service halt at the Royal Welsh Showground in Builth Wells, Tom and James delivered another first and two second-fastest times, which enabled them to maintain their lead by two seconds at the half-way point. Following a quick check around the car by the Spencer Sport team, they embarked on the afternoon’s four stages and, like the weather, the battle between them and their main rivals got even hotter.

In fact, on stage five both crews set exactly the same time, four seconds faster than anyone else. Still with a two-second advantage, Tom knew it would be flat to the finish and, although he and James pushed as hard as they could through the remaining three stages, they could not hold off Edwards/Garrod who fought back to take the win.

But on returning to Builth Wells, unknowingly Tom and James found that they had contravened an event regulation due to a rare co-driver error and were consequently disqualified from the results.  Although a conclusion they and the team would not have wished for, Tom and James were pleased they had been able to get straight back to a front-running pace. The team were also happy that the stage times clearly proved the Mitsubishi Mirage was a match for any other R5 class car.

“Whilst the final outcome was of course, not what we had wanted, rallying is a complicated sport with lots of rules and regulations, so these things can and do happen”, said Tom at the finish.

“It was great to be back in an R5 specification car alongside James who did his usual great job on the notes. And to be straight back on the pace right from the start was very reassuring to us both.

“The Mirage has really progressed into a competitive car and the stage times prove it. It’s great to drive and I hope I have the opportunity to enter another event with it soon.

“I have to thank everyone involved who made this event happen for us: Spencer Sport, Spencer ECA, DMACK Tyres, Nicky Grist Motorsport, Walero Racewear, Atech Racing and the team’s sponsors: Oil for Wales, Speedline Wheels, Motul Lubricants and Sea & Slate.”
Further news about Tom’s next event will be announced soon. 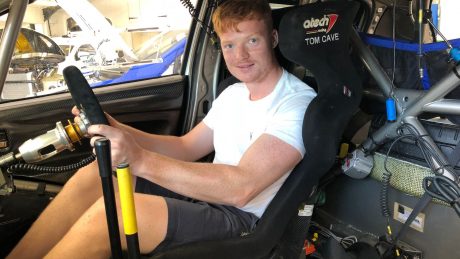 Tom Cave and co-driver James Morgan have been announced as the number one seeds for this Saturday’s (14th July) Nicky Grist Stages Rally, when they will compete in an R5 specification Spencer Sport Mitsubishi Mirage.

The event will see the Welsh pair back in action for the first time since last October’s Wales Rally GB, when they finished an impressive third in the WRC2 category driving a Fiesta R5. With 2018 year of consolidation for Tom, he is relishing a return to the hot seat:

“As plans didn’t quite come together in time for the start of the season, I’m only intending to enter a few rallies in 2018. I’m therefore grateful to Spencer Sport for giving me an opportunity to get back out there and keep my hand in. Of course, I’ve worked with Spencer Sport before when we finished second in the British Rally Championship in 2016. It was a great team effort. Having led the event at one point, we also finished second on the Nicky Grist Stages in that year behind Elfyn Evans.”

Tom is mindful that with a 120-strong field, a number of previous event winners and crews in WRC cars taking part, it’s not going to be easy to score a top result and says he will have a better idea of what’s in store after he has tested the Mitsubishi on Thursday (12th July):

“I’ve driven the Mirage before but only in testing, so it’s great to now have the chance to compete in it too. I know there’s been a number of upgrades since I drove it last, so I’m looking forward to finding out what it’s like now, especially on a rally like the Nicky Grist Stages.”

The event represents round six of the BTRDA Rally Series and gets underway at 09.00 on Saturday from the centre of Builth Wells. The route incorporates the gravel roads and forests around the Epynt military ranges on the Brecon Beacons and features a loop of four timed special stages in the morning followed by a repeat run in the afternoon.