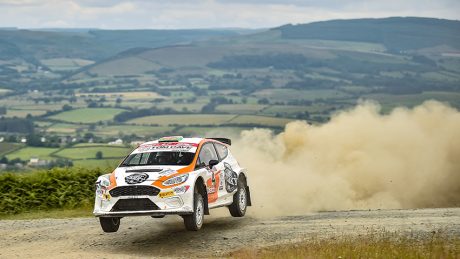 In his first rally since February 2020, Aberdyfi’s Tom Cave together with co-driver Dale Furniss from Llanfylin, took the fight to the forests when following an event-long battle for the lead, they emerged from the eighth and final stage of this year’s Nicky Grist Stages Rally in second place, just five seconds from victory behind British Rally Championship rivals Matt Edwards and Darren Garrod.

Driving a Ford Fiesta Rally 2 for the very first time and having not competed for 16 months, Tom was eager to hit the ground running from the off. And following a successful test a couple of days before the event, that’s exactly what he did.

Starting and finishing from the Royal Welsh Showground in Builth Wells, the Nicky Grist Stages comprised four stages in the morning followed by a second loop of the same route in the afternoon. It was clear from the start that Tom carried on where he left off last year when he set the second-fastest time on stage one Llyn Login, just one second behind Osian Pryce.

Another second-fastest time on stage two Monument, followed by a win on stage three in Halfway Forest saw Tom take the lead, albeit sharing the same overall time with Edwards. The fourth stage of the day was also the longest, a nine-mile encounter through the infamous Crychan Forest.

Another impressive performance enabled Tom to keep in contention and, as crews entered the lunchtime service halt in Builth Wells, he and Dale found themselves in second place, two second behind Edwards and Garrod. And, with Pryce and his co-driver Noel O’Sullivan third, just five seconds further back, the scene was set for an intense battle in the afternoon.

And the leading trio didn’t disappoint. Tom and Edwards posted equal-fastest time on SS5, with Pryce one second behind. Then in SS6, Edwards found an extra four seconds, whilst Tom and Pryce shared the second-fastest time.

With Edwards gaining another second and Tom doing likewise from Pryce in SS7, the timesheets at the start of the eighth and final stage showed a gap of seven seconds between the leading pair, who had pulled out the same margin from Pryce in third. It was now all down to the final stage, but with no breeze and the gravel roads now bone-dry, the dust generated by the cars ahead was destined to prove decisive.

Throwing almost everything he had in his rally-skills arsenal for the second run through Crychan, Tom drove a blinder and at the end of the stage Edwards – who was running first on the road – waited anxiously at the finish control. As the clock stopped, it was revealed that Tom had closed the gap to just five seconds, with Pryce claiming third, seven seconds later.

“I’m happy with that. Of course, it would have been good to win on my return to the British Championship, but I’m satisfied with second, especially with the visibility issues to contend with”, said a satisfied Tom at the Finish.

“When you’re out of the seat for a while, you do start to wonder whether you’re going to be on the pace, but today’s event has answered that question. It’s been a fantastic battle all day with Matt and Osian. Just like old times. I have to congratulate Matt for job well done and Osian for keeping me on my ‘A’ game from start to finish.

“A big thanks goes to Dale for doing such a good job alongside me today. I’m also grateful to the team at Dom Buckley RSC who provided me with a car that ran faultlessly. They also did a great job getting everything organised during the lead up to this event.

“I have to especially thank each and every one of my sponsors: Trailhead Fine Foods – Get Jerky, Intervino, Go Fetch, Pirelli Motorsport, Atech Racing and all of the unsung heroes that are involved with the considerable operation that’s required to deliver a successful rally. I know it’s a cliché to say that we couldn’t have done it without them, but we really couldn’t. I know that together we can build on what we’ve achieved today, with the ultimate aim of challenging for the British title.” 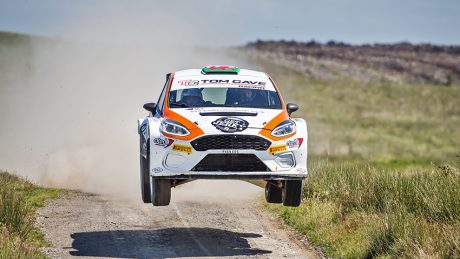 Tom is delighted to confirm that he will take part in this Saturday’s (10th July) Nicky Grist Stages Rally, round two of the 2021 British Rally Championship. The Builth Wells-based event will be his first competitive outing since the Cambrian Rally in February 2020 and understandably, he is looking forward to being back behind the wheel again:

“Having recently secured the backing from a collective of Welsh businesses and other supporting partners, the package to compete in this weekend’s Nicky Grist stages and kick start our season has literally come together in the past few days. I’m therefore extremely grateful to Trailhead Fine Foods Get Jerky, Pre-Eminent Solutions, Go Fetch, Atech Racing and Pirelli Motorsport for their invaluable support.”

For the first time since the Wales Rally GB in 2017 – when he finished an impressive third in the WRC2 category – Tom will be driving a Ford Fiesta Rally2 prepared and run by Dom Buckley RSC. Returning to the co-driver’s seat will be Dales Furniss from Llanfylin who accompanied Tom for last year’s Cambrian Rally – the only event the pair contested in 2020 before lockdown intervened.

Previous to that, Tom and Dale recorded their best ever World Rally Championship result by finishing 11th overall on the 2019 Wales Rally GB and in doing so, secured third place in the WRC2 class as well as winning awards for being the first independent entry and top Welsh crew.

“After what feels like a long 16 months, I hope I’m not going to be too match-rusty. We have some testing lined up this week, so the plan is to be on the pace when we set off on Saturday. It’s going to be great competing again, especially over the stages this rally uses as they’re some of my favourites. I really can’t wait to get started!”

A top-quality entry sees Tom and Dale seeded at #4 in a packed field of 150 cars. Indeed, such was the popularity of the event, orgainisers reported that entries sold out in 15 minutes!

The rally features a loop of four stages in the morning that is repeated in the afternoon, the combination of all eight stages providing a competitive distance of 44 miles. Whilst an event that has always attracted large numbers of spectators, at the request of the Military of Defence that owns much of the land used by the rally, this year will see the event take place behind closed doors.

Consequently, the action can be viewed via live stream broadcast on the Special Stage TV Facebook page: https://www.facebook.com/specialstage. The stream will also be accessible alongside the live tracking feed: http://rallytracking.co.uk/  Plus, there will be further coverage provided by Rally FM: http://rallyfm.net/