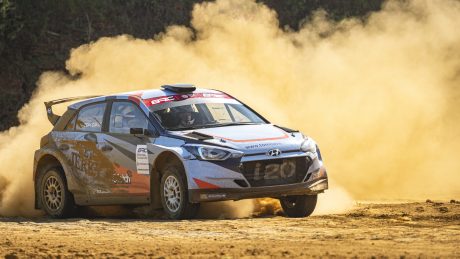 For two days in the middle of May, Hyundai UK invited us to take part in its Spring Drive Event, where journalists and key personnel were given the chance to experience the latest range of Hyundai cars – and discover what it’s like to ride in a rally car.

The event was based at a farm about ten miles north of Banbury that featured a superbly converted barn where guests were welcomed in the morning before embarking on a series of pre-determined routes in various Hyundai models. Our role was to provide the attendees with demonstration rides in our i20 R5 in between their test drives.

To do this, we set up a stage at a nearby quarry, which provided a perfect ‘Ken Block’ style venue where we could put the car through its paces and give our passengers a ride they’ll never forget. Whilst some had previously experienced what it’s like to be strapped into the co-driver’s seat and driven at almost full rally-speeds around a stage, for others it was their first time. Either way, it would be fair to say that without exception everyone was blown away by the experience.

“This is the first time we’ve worked with Hyundai UK and we were delighted to be involved with this event. PCRS came over from Ireland with the Hyundai i20 R5 we’ve been using for this year’s British Rally Championship, so for the guests, it was the real deal.

“We ran almost non-stop over the two days in what were very dry and dusty conditions, which meant that from the photos it looked like we were competing somewhere overseas. We took out well over 30 journalists and Hyundai personnel, including the company’s chief European designer and the UK managing director.

“Other than the car needing fuel towards the end of the second day, the team didn’t have to do a thing to it, which considering we covered the same mileage as a British Championship round in ‘Safari-like’ conditions, was an impressive statistic.

“We’ve had some great feedback since the event and there’s been some excellent media coverage. We therefore look forward to doing more with Hyundai UK in the future.”