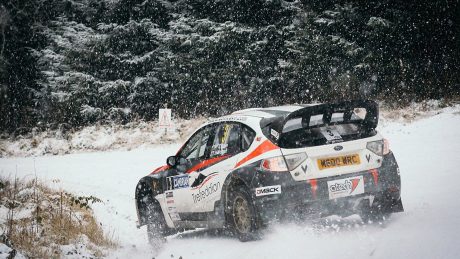 It wasn’t the outcome that Tom Cave, co-driver James Morgan, or indeed all of the 108 competitors and everyone involved with Saturday’s Llandudno-based Cambrian Rally had expected, when the event was cancelled after stage one due to a significant overnight fall of snow and sub-zero temperatures.

With it his first rally in the car, Tom (from Aberdovey), tested the McKinstry Motorsport WRC Subaru Impreza on Friday morning. After a few small tweaks to the suspension and with the DMACK tyres working extremely well, Tom felt comfortable in the car and ready to challenge for his first Cambrian Rally victory.

But, when he and James (from Hirwaun) arrived at the start of the opening stage – a 6.35-mile run through Alwen Forest – they were surprised to encounter a road that was completely covered in compacted snow and ice. Running ahead of the rest of the field, there were no tyre tracks or indeed any sign of gravel showing through the white carpet that lay ahead of them.

A cautious approach was definitely the order of service and, with very little grip to be had, Tom and James were extremely relieved to make it to the finish of the stage, having stayed on the road and setting third-fastest overall time after a masterly display of car control. However, any measure of performance was somewhat irrelevant, as it was clear from a competitor’s perspective that the rally could go no further.

News then came in that organisers had cancelled the remaining five stages and subsequently instructed crews to return to the service area, where Tom said:

“It was absolutely the right decision to cancel the rest of the event. It was crazy carrying on in those conditions.  I feel sorry for the organisers and marshals, as I appreciate just how much work goes into a rally like this. But it was better to take this course of action than to take any risks in conditions that were more in keeping with the Swedish Rally that’s also taking place this weekend.”

“Of course, it was a shame not to be able to put on a good show for my sponsors and supporters, or to make full use of the World Rally Car at my disposal. I’ll therefore have to wait another year before I can complete what I regard as unfinished business on my most local event. In the meantime, I’m contemplating another outing in the Subaru soon.”

Tom went on to thank James for helping him keep the car on the icy roads and his supporters for this event: the Trefeddian Hotel, DMACK Tyres, Walero and Atech Racing.  Also to McKinstry Motorsport for making the journey from Northern Ireland for a weekend that was somewhat cut short.

Further news about Tom’s 2017 rally programme will be announced soon. 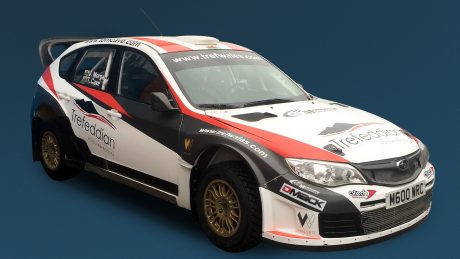 Following a highly successful 2016, when he finished runner-up in the MSA British Rally Championship, Aberdovey driver Tom Cave kicks off his 2017 season with the Llandudno-based Cambrian Rally that takes place on Saturday 11th February. The 25-year old is pleased to be starting his year with one of his most local rallies and consequently, is aiming for nothing less than a top result.

In order to enhance his chances of success, Tom has acquired a WRC Subaru S14 from McKinstry Motorsport to contest the event that hosts the first round of the BTRDA Rally Series. Although having never driven the car before and with his most recent gravel outing that of the Nicky Grist Stages in July, Tom’s experience in four-wheel-drive machinery last year is destined to stand him in good stead. Indeed, it’s worth noting that Tom took outright victory in the last BTRDA event he contested, the Plains Rally in May.

Starting and finishing on Llandudno Promenade, this year’s Cambrian Rally features 42 competitive miles split into six stages in the Clocaenog, Alwen and Penmachno forests, all previously used for the Wales Rally GB.

“I’m passionate about supporting events in Wales, especially this one as it’s organised by my car club, so to compete on a rally that takes place only 20 miles from where I live and features such good stages is a perfect way to start the season. It’s also an excellent way to promote my sponsors, including our family business, the Trefeddian Hotel.

Tom’s season takes on a different look to that of last year’s when he got within one place of winning the British title:

“Of course, I did consider continuing in the British Rally Championship this year, as I feel I could have really challenged for the title. But following the cancellation of the opening round – the mid-Wales Stages – it made it a difficult to justify a BRC campaign to many of my sponsors.

“My plans are now to enter a series of selected rallies that will expand my experience and continue to keep me match-fit. As to what events these will be is still to be decided, but I’m really looking forward to what’s going to be an interesting season ahead, especially as I’ll be kicking things off by driving a WRC car on the Cambrian Rally.”

Tom will be joined next weekend by his regular co-driver from 2017, James Morgan from Hirwaun. The car will carry the livery of Tom’s sponsors: Trefeddian Hotel, Dmack tyres, Walero and Atech Racing:.
A test has been organised in nearby forests on Friday 10th February and Tom has extended an invitation to the media to sit along side him as he shakes-down and acclimatises to the Subaru. Those who would like to attend should get in touch with Press Officer Simon Slade: simon@rpmpromo.com / 07966 1535555.