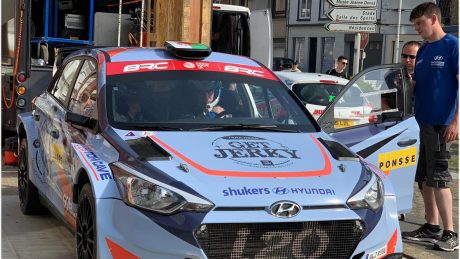 Taking place on smooth West Flanders asphalt roads, for the Aberdovey driver this weekend’s event is the biggest of the season on three levels: overall competitive distance, the rally’s sporting status and for keeping Tom’s title hopes on track.

“It’s an important one for us, as we will be fighting to maintain our championship lead”, explains Tom. “It’s a demanding rally too. Whilst the stages are on good quality roads, they’re very technical in nature and you have to concentrate 100% of the time.“

Tom will be partnered in Belgium by fellow Welshman and his regular co-driver for 2019, Dale Bowen and will be driving the same Philip Case Rally Sport prepared Hyundai i20 R5 that he has used for all three previous British Championship rounds.

“I last did this rally two years ago – also in a Hyundai i20 R5 – and although we didn’t finish on that occasion, following the experience gained and the development of the car since then, I am confident we can be very competitive this year.

“As usual there’s a high quality of crews and teams on the entry list and whilst we’ll be fighting for overall honours, our main focus will be to beat our BRC rivals, of course. I must admit that following my last asphalt outing in Ireland, I’m really looking forward to seeing what we can do in Belgium.”

A test on Tuesday on similar roads that will be used for the rally went exactly according to plan, with Tom reporting that the Michelin tyres were working exceptionally well in the dry and warm conditions.

Tom and Dale will carry #5 on the door of their Hyundai and will take part in Thursday evening’s qualifying session that will dictate their eventual starting position.

Following the pre-start ceremony in the centre of the town, the Ypres Rally gets underway at 16.10 CET. Crews tackle nine stages that evening and following the overnight halt, another 14 on Sunday, with the finish scheduled to take place at 21.30. The rally’s overall competitive distance of 278 kms makes this the longest event in the BRC calendar.