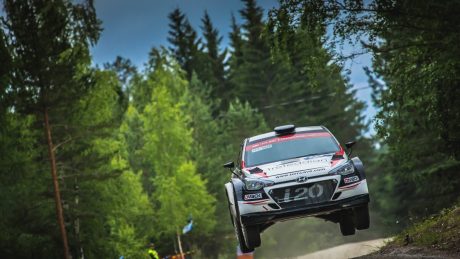 Welsh driver Tom Cave is pleased to announce that he has entered this year’s Wales Rally GB, which takes place from 4th – 7th October. He will drive a PCRS run Hyundai i20 R5 and will be partnered by his regular co-driver James Morgan.

Tom from Aberdovey and James from Hirwaun enjoyed a busy season in 2017, when they gave the Hyundai 120 R5 its British Rally Championship debut and then went on to finish third in WRC2 on Rally Finland. They then repeated the result on Wales Rally GB driving a Fiesta R5.

In contrast, 2018 has seen a far quieter season for the Welsh pair. In addition to an outing early in the year driving his own Subaru, Tom entered July’s Nicky Grist Stages, when he and James impressed with a front-running performance in a Spencer Sport R5 specification Mitsubishi Mirage.

Eager to get back onto the world stage, Tom has since focused his attentions on securing an entry in Britain’s round of the FIA World Rally Championship. Thanks to support from DMack tyres, Trailhead Fine Foods, Pre-eminent Solutions, H.N. Nuttall Foodservice, Cave Equine, Atech, Walero and Philip Case Rally Sport – who will supply and run the car – he has been able to enter the event.

“With Wales Rally GB my home round of the WRC and after James and I finished on the WRC2 podium last year, I’m extremely pleased that everything has come together in time for us to enter this year’s event and I have to thank everyone involved for their invaluable support.

“This year marks the 10th anniversary of Tom competing on a World Championship rally and my ninth time contesting the Wales Rally GB, which makes this year’s entry even more significant.

“It’s great to be back in a Hyundai i20 R5. The last time I drove the car was in Rally Finland last year and we finished third in WRC2.  The Hyundai really suits my driving style, so I’m hoping with a latest-specification model and the previous results behind me, James and I can be even more competitive this year.”

Trailhead Fine Foods are using Tom’s Wales Rally GB campaign to launch its new Get Jerky snack. Furthermore, the company will be providing all of the event’s 2000+ marshals with a complementary pack containing its brand new product. Samples will be available from the Wales Rally GB office located in the Deeside service park.