Tom prepares for take off in Finland 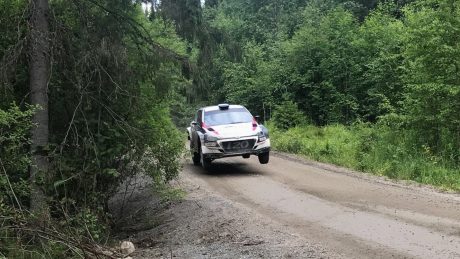 British rally driver Tom Cave is currently preparing to contest his biggest event of the season so far, when he enters this year’s Neste Rally Finland (27 – 30 July), round nine of the FIA World Rally Championship. Together with his regular co-driver James Morgan, the Welsh pair will be competing for honours in the WRC2 category driving a Hyundai i20 R5.

Having entered three rounds of the Prestone MSA British Rally Championship earlier this season, Finland marks the fourth outing for Tom (from Aberdovey) and James (from Hirwaun) in an i20 and represents their first WRC round in the car. Whilst Tom has competed on the event twice before – the last time in 2015 when he won the DMACK Drive Trophy – this will be his first time driving a four-wheel-drive car.

“It’s great that we’ve been able to pull things together to be able to enter Rally Finland. It’s one of the world’s classic events and, having gone well there previously in a two-wheel-drive car, I’m so looking forward to have the opportunity of driving the i20 this time.”

The car Tom will be driving is a brand new New Generation Hyundai i20 R5. It is owned and prepared by Sarrazin Motorsport, who will be supporting Tom on the event.

“As I haven’t driven this particular i20 before, I’m carrying out two days of testing on Sunday and Monday (23rd & 24th) on two different types of road – one with jumps and long straights for which the rally is so well known and the other with fast and flowing corners. I want to be as prepared as I can possibly be for this rally. We will be competing in the WRC2 category and to do well at this level will mean a great deal to me. It’s a very exciting prospect.”

Following the two days of testing, Tom and James will recce the stages on Tuesday and Wednesday, before taking part in the pre-event shakedown on Thursday morning. The rally begins with the Ceremonial Start in Jyväskylä that evening, followed by a short spectator stage.

The event then heads to the forests for 12 stages on Friday, a further eight on Saturday and four on Sunday. Combined, the rally’s 25 stages provide a competitive distance of 315kms.