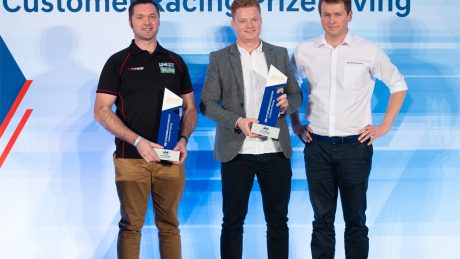 To acknowledge the success of its customer racing teams in 2019, Hyundai Motorsport’s Customer Racing division held a prize-giving event at its Alzenau-based headquarters on Monday (November 26).

Tom was delighted to be one of the drivers invited to attend this prestigious occasion that saw more than 50 people who represented many of Hyundai Motorsport’s most successful customer campaigns from around the world. Those attending were responsible for victories with the Hyundai i20 R5 in rallying and the Hyundai i30 N TCR and Hyundai Veloster N TCR in racing.

The prize-giving ceremony, where the leading drivers and team representatives were awarded a specially designed trophy, was held only metres away from the workshops where the winning cars are built, in the same facility that also houses Hyundai Motorsport’s championship winning WRC team. And as well as a day to reward the teams’ performances during the season, the event also gave them a chance to catch up with some of the Customer Racing department engineers and mechanics.

Rallying customers were well represented among the guests, including national title champions from Slovenia, Romania and Netherlands, who were joined by runners up in the German, Spanish, Portuguese national series’ and of course, the British Rally Championship. Also receiving an award was Philip Case of PCRS, the Letterkenny-based team that did such a great job of preparing and running the Hyundai i20 R5 that Tom drove to success this season, not only in the BRC, but also in October’s Wales Rally GB.

Hyundai Motorsport Customer Racing Senior Sales Associate Andrew Johns said: “The day when we get to host our successful customers in Alzenau is always one of the highlights of the year. It’s a great opportunity to firstly celebrate the championship and race wins, but also to build on the strong relationships we have with our customer teams. To have so many attend is fantastic and really shows the strength of the R5 and TCR cars can deliver. Hopefully we can see some of the same faces back this time next year, together with some new names on the roll of honour after another successful season.”

Following the event, Tom commented: “It was a privilege to be invited to Hyundai Motorsport’s Customer Racing event and to be presented with an award for our efforts this season – especially amongst other leading drivers and teams from around the world. It’s been great to be part of the HMSG family this year and to be associated with the success of the company’s R5 programme. I therefore hope that we can continue the relationship into 2020 and look forward to making further announcements soon.”

Tom also extended his appreciation to PCRS and his co-drivers during 2019: Dale Bowen, James Morgan and Dale Furniss.

* Subject to the official publication of the results by the FIA