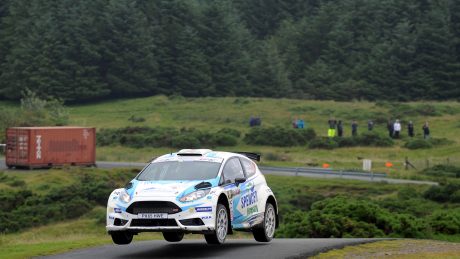 For the second time in as many events, Tom Cave from Aberdovey and his co-driver James Morgan from Hirwaun have scored an impressive second place on an MSA British Rally Championship round and in doing so move up to second in the 2016 standings. Adding to the significance of their result on this weekend’s Nicky Grist Stages Rally, were the extremely wet conditions over both days, coupled with the format of the event that featured gravel stages on Saturday and Asphalt stages on Sunday – a factor that was to reveal which crews were the best all-rounders.

The eight gravel stages on Saturday followed by 10 asphalt stages scheduled for Sunday all took place on and around the Epynt military ranges, the area being one of the only locations in the UK that is capable of hosting a mixed-surface event such as this year’s Nicky Grist Stages. Consequently, with a total of 45 competitive miles followed by 59 miles respectively, as well as for the drivers and co-drivers, the event was to provide a true challenge for the service crews – who would have to change suspension set-ups on Saturday night.

Conditions notwithstanding, Tom made a perfect start and set the fastest time on the opening stage, beating all his main championship rivals: David Bogie, Fredrik Ahlin and Elfyn Evans. Tom continued to hold the top spot until stage three, when current championship leader Evans took the lead when Tom and James were slowed by an overshoot.

However, although ahead of second-in-the-championship Ahlin, Tom and James’ challenge for championship places was eased when the Swede retired on stage two, meaning he had to restart on Sunday under Super Rally regulations but with a series of time penalties applied.

But for Tom and James, the remainder of Saturday’s competition saw them go on to deliver a committed and controlled performance that served to consolidate their second place. Consequently, they pulled away from the rest of the pack and, at the conclusion of the eight gravel stages, they were 52-seconds ahead of third-placed Desi Henry and 48-seconds behind Evans.

Although the rain had eased off in on Saturday afternoon, it was to come back with a vengeance during the course of Sunday morning’s asphalt stages. Initially the roads that crisscross the military ranges were in reasonable condition, but as the weather deteriorated they became more and more slippery, especially with mud being pulled out onto the road as cars cut the tighter corners. Whilst this is not usually such a big an issue for the front-runners, the multi-use of the roads meant that grip levels changed from stage-to-stage.

But that didn’t phase Tom and James as they continued to maintain their pace and underpin their second place. Although their stage times didn’t reflect it, they admitted they were not pushing too hard, so that if anything were to happen to the leader, they would be in a perfect position to take advantage of an opportunity, should it arise.

However, following an incident involving another competitor – fortunately without any serious consequences – and due to the subsequent delay, the rally organisers decided to cancel the final three stages that meant the top three positions remained unchanged.

Following the two days of intense competition and, having dealt so well with all the challenges that were presented to him, Tom was understandably pleased with his weekend’s work when he was interviewed at the finish in Builth Wells:

“We know Elfyn (Evans) was going to be difficult to beat this weekend, so it’s great to be the best of the rest. I’m very pleased that we have been able to score our second second-place in succession and to move up to second in the championship standings.

“It’s also satisfying to know that we’ve been the most consistently placed crew so far, having scored a top four position in all five rounds. That 100% finishing record is in no small part down to the reliability of the car that once again, ran faultlessly throughout this event and I have to congratulate the Spencer Sport team for all that they do to make this happen.

“I must also praise our Michelin tyres that worked exceptionally well on both the gravel and tarmac surfaces and in such changing conditions. Thanks also go to my co-driver James for his great work inside the car.”

The sixth round of the MSA British Rally Championship takes place in six weeks time when, for the second time this season, competitors will experience Northern Ireland asphalt, this time for the Ulster Rally on 19th & 20th August.