Two in a row for Tom! Cave claims 2nd British Rally Championship win of the season on the Pirelli International Rally 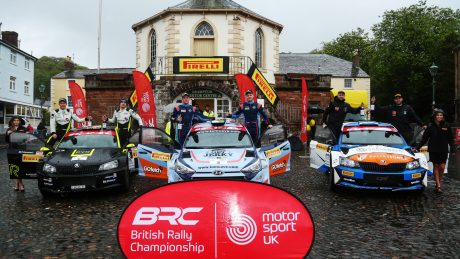 Tom Cave achieved exactly what he set out to do this weekend, when he recorded his second British Rally Championship victory in succession by winning Saturday’s (27th April) Pirelli International Rally. He and co-driver Dale Bowen took the lead after stage two and went on to win the third round of the season by an impressive margin of 17.6 seconds – a result that sees Tom top the championship’s drivers table by seven points at the season’s halfway point.

Following a victory on an asphalt surface last time out, Tom was eager to do the same on gravel. However, with competition coming from top UK drivers such as Matt Edwards in a Ford Fiesta and David Bogie and Rhys Yates in Skoda Fabias – plus the appearance of Finish driver Jari Huttenen in an identical PCRS-run Hyundai 120 R5 to that of Tom’s – it was never going to be a straightforward affair.

Following the showcase start at the Pirelli factory on the outskirts of Carlisle, teams headed into Kielder Forest for the first of the day’s six stages. Taking into account a slow puncture and a misting windscreen in the damp conditions, Tom and Dale were pleased to emerge from the opening run in second place, just 1.4 seconds behind Huttenen.

But at the end of the second stage the tables were turned, when the Fin spun and dropped 20 seconds. Tom and Dale set the fastest time and consequently, entered the first service halt of the day 15.3 seconds ahead of their closest rivals, Matt Edwards/Patrick Walsh.

Another good run for the Welsh pair through stage three was only briefly interrupted when they caught and passed Edwards/Walsh who had sustained two punctures – a factor that not only dropped the round-one winners down the leaderboard, but eventually led to their retirement.

Another fastest time through stage four meant that when they arrived at the second service halt, Tom and Dale were 20.5 seconds ahead of second-placed Yates and Tom’s co-driver in West Cork James Morgan.

It was now a case of consolidation and taking clean lines through the corners in order to minimise the risk of punctures for the event’s remaining two stages – and that’s exactly what Tom and Dale did. Following a perfectly executed final two runs, they arrived at the finish control in Brampton a few miles east of Carlisle, a convincing 17.6 seconds ahead of Yates/Morgan and a further 21.9 seconds ahead of David Bogie/John Rowan in third.

“It’s great to have scored two wins on the bounce, especially one on asphalt and one on gravel. I haven’t won the Pirelli International Rally before, so I’m pleased to have laid that spectre to rest. Things really went according to plan and, after taking the lead on stage two, it was a case of managing the gap for the rest of the day.

“The car ran faultlessly throughout the event and I have to thank the PCRS team for all their hard work. This result is testimony to their efforts.  Also helping us achieve what we did today were the Michelin tyres that worked extremely well in the ever-changing weather and surface conditions.

“I’m also pleased for Dale too, as this was his very first outright rally win and I have to thank him for doing such a fantastic job not only in the car, but during the lead up to the rally as well.

“It’s great to now lead the championship with three rallies done and three more to go. The race for the title is now well and truly on!” 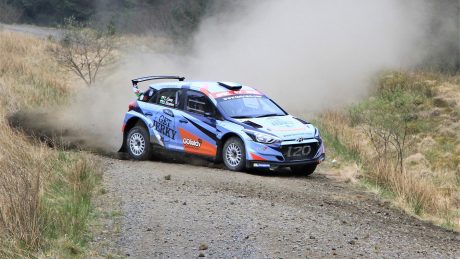 Following his victorious run on last month’s West Cork Rally – the second round of the British Rally Championship – Tom now sets his sights firmly on round three, this Saturday’s (28th April) Pirelli International Rally. Having scored maximum BRC points on asphalt last time out, a second win as the surface reverts to gravel is exactly what the Aberdovey-based driver is looking for to consolidate his bid for the British title.

Reunited with co-driver Dale Bowen – who had to miss round two – Tom will be driving the same Philip Case Rally Sport prepared Hyundai 120 R5 that he used in Wales for round one and in Ireland for round two. Reacquainting himself to the car, he tested it in Kielder Forest on Wednesday on roads similar to those he will encounter this weekend:

“We had a very good test and ran through our-pre-event programme. The Hyundai felt great and the Michelin tyres worked well. However, I’ve never seen the roads in Kielder so dry and abrasive. If things stay like this it will make for a very interesting event.”

Tom and Dale are seeded at #2 on Saturday and consequently, will start the event behind current championship leader Matt Edwards in a Fiesta. They are followed at #3 by former British Champion David Bogie in a Skoda and Finnish driver Jari Huttenen at #4, who is making a one-off appearance in the BRC behind the wheel of another PCRS-run Hyundai.

“The third event of the season sees another to-quality entry”, explains Tom. “Whilst it adds to the pressure, it makes for great competition and because of that, if you do well it’s even more satisfying.

“It also means there’s no room for error and it’s flat out from the start. We’re as ready as we can be, so our aim is to carry on from where we left off in West Cork – and we can do no more than that.”

The Pirelli Rally starts in Carlisle on Saturday morning and features 63.35 competitive miles split into seven stages, held over the distinctive gravel roads that are a hallmark of Kielder Forest. The rally concludes in the evening with a high profile finish ceremony in Brampton, a few miles east of the host town.