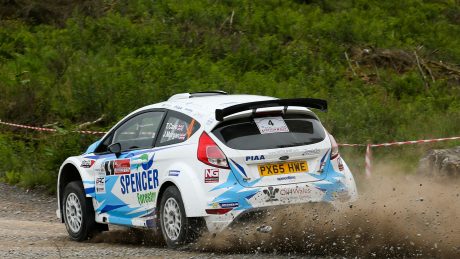 Tom Cave and his co-driver James Morgan did their title hopes no harm at all this weekend, when they recorded their best ever MSA British Rally Championship result this season with a second place in round four, the RSAC Scottish Rally. The value of their performance was doubled by virtue of Tom playing his joker and consequently, he and James scored twice as many points than they would have done otherwise.

An inspired outright victory on last month’s Plains Rally, followed by a good pre-event shake-down with the Spencer Sport Fiesta R5 last week, meant that Tom arrived in Dumfries for the start of the Scottish Rally in positive mood and ready to resume battle for the BRC title.

Then fourth in the championship standings, he knew he would be up against some tough opposition, namely Fredrik Ahlin, Elfyn Evans and Josh Moffett, who were also in Fiesta R5s – and at that point holding the top three positions in the championship respectively – plus local driver David Bogie in a Skoda R5, who had also played his joker for this event.

The rally, round four of the British Championship, comprised a route featuring a distance of 62 competitive miles split into eight stages within the forests close to the host town of Dumfries. The road surface and character of the stages is quite specific to the region. However, it didn’t take Tom long to acclimatise to the unfamiliar territory and consequently, he set the third fastest time on the first stage, just behind Evans and Bogie.

Another third fastest time through stage two meant he and James entered the first service halt in fourth place, albeit just 0.6s behind Ahlin who had edged ahead. But on the next stage Tom felt the car lose power and, although setting the third fastest time on stages three and four – and still in third place due to Ahlin’s retirement on stage four – the Fiesta was definitely in need of some attention at the lunchtime service halt.

The problem was quickly traced to a faulty regulation FIA turbo-boost pop-off valve and, between the Spencer Sport and M-Sport engineers, all was fixed before Tom and James embarked on the afternoon’s stages.

With his Fiesta restored to full power, Tom went in pursuit of Bogie and Evans and was third fastest again on stage five, before setting the second fastest time on stage six. With organisers cancelling stage seven, suddenly it was all down to the final stage – a 10.64-mile run through a forest referred to as Mount Joe.

An epic drive resulted in Tom setting the quickest time through the stage, 4.5-seconds faster than Evans – a performance that secured him and James a hard-earned second place. Although making it through the stage, unfortunately for Bogie, a broken radiator meant he didn’t make it to the finish, which meant that Desi Henry inherited the final podium position.

“This result just goes to show that it’s not over until it’s over”, said Tom at the finish. “When the engine started to lose power we feared our challenge might be over, but a great job by the Spencer Sport and M-Sport engineers meant we were back in contention. We really pushed hard in the afternoon to make up for any lost time and I’m extremely pleased to have set the fastest time on the final stage and to have taken second place.

“I feel sorry for David (Bogie). That was really though luck, especially on his home event. Getting through the final stage and then not being able to make it back to the finish is the most frustrating thing that can happen, as all the hard work’s been done.

“It’s great for us to have gained a good haul of points on this event. Everything is going in the right direction at the moment: the car and the team, plus James and I as a partnership, so things are looking good for the remaining three rounds. I have to thank Spencer Sport, M-Sport, James and all of our supporters, especially Michelin and Tim Hoare for providing us with excellent tyres, advice and technical support.”

The result in Scotland makes Tom and James the most consistent of all top-four BRC crews, being the only pair to finish and score on all rounds so far. Consequently, they now move up to third in the championship standings.

There’s now just a two-week break before the next event in the MSA British Rally Championship calendar, which takes place on Saturday 9th and Sunday 10th July. The two-day mixed surface Nicky Grist Stages Rally features gravel on the first day and asphalt on the second, over roads on and around the Epynt military ranges near Brecon in South Wales.