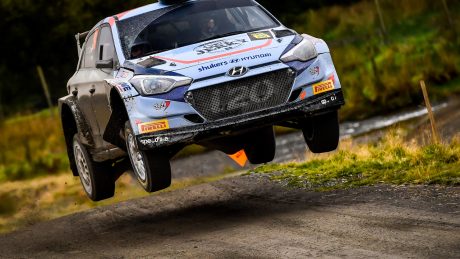 Tom, together with co-driver Dale Furniss, delivered a personal best performance on this year’s Wales Rally GB – Britain’s round of the World Rally Championship – when he finished an impressive 11th overall and took third place in the fiercely competitive R5 category.

Tom and Dale also collected awards for being the first privateer entry, the first non-WRC registered entry and top Welsh crew.
The rally began on Thursday afternoon with a well-attended ceremonial start and autograph session at Liverpool’s Waterfront development. With the first and second finishers in the British Rally Championship nominated to head the field, Tom had the privilege of being flagged away as car two by the city’s mayor, behind his season-long BRC rival and PCRS Hyundai team-mate for this event, Matt Edwards.

Competitors headed to Oulton Park for the first of the event’s 22 stages – a spectator-friendly affair that used parts of the circuit and a variety of the venue’s in-field roads. Greeted by a light drizzle, conditions were extremely slippery and after loosing the effect of the car’s power steering in a man-made watersplash and then spinning later in the stage, Tom and Dale dropped a few seconds to their category counterparts. However, they were through the test safe and sound and ready to start the first day ‘proper’ in the northwest Wales forests that are familiar territory to Welsh pair.

As Tom went to start the first of the morning’s four stages, he noticed something amiss with the car’s electronics that caused an issue with the launch control and ALS (Anti-Lag-Strategy). Add to this a fault with the wipers – not ideal in the conditions – he and Dale did exceptionally well to get back to service lying 20th overall and as the ninth R5 entry out of 28.

With the PCRS team returning the Hyundai to 100%, Tom was able to pick up the pace for the afternoon’s five stages – a re-run of the morning’s four plus the Slate Mountain spectator stage – and bit-by-bit he and Dale moved up the leaderboard to end the day 15th and 6th respectively.

The weather improved for Saturday morning’s three-stage loop in classic Rally GB mid-Wales territory. With the car, tyres and crew all set and raring to go, an impressive display of driving saw Tom battling with former World Rally Champion Petter Solberg in a VW Polo R5, Tom initially getting ahead before the Norwegian legend took back the place, albeit by a handful of seconds.

Although weather conditions worsened for the afternoon’s repeat run of the morning’s stages plus another spectator affair at Colwyn Bay in the evening, another fast and consistent performance enabled Tom and Dale to improve their position and when they pulled into the service area in Llandudno for the overnight halt, they were 13th overall, 4th in the R5 category and just 0.3 seconds from being the first privateer entry.

Albeit overcast and blustery, Sunday dawned without the accompaniment of rain. It was clear to see by their time through the first of the day’s first run in Alwen Forest that Tom and Dale were fired up for a final-day push by claiming two places and in doing so, elevated themselves to 11th overall and third of the R5 cars, behind the Pro WRC2 entry of Kalle Rovenpera in a works Skoda and Solberg, who was now 12 seconds ahead.

The next stage in Brenig Forest – which saw another well executed delivery by the Welsh pair – should have been followed by a run around the Great Orme, but the prevailing windy conditions and consequently no diver cover in the sea below the stage led to the stage being cancelled. Therefore, when Tom and Dale arrived for the mid-morning service, the timesheets showed they had held station.

With just two more stages left – a re-run of Alwen and Brenig – Tom pushed as hard as he could to see if he and Dale could edge into the top 10. However, everyone else pushed too and when they returned to Llandudno sea front for the finish, the results revealed they had consolidated their position of 11th overall and 3rd in the R5 (RC2) category, as well as finishing first non-WRC registered entry, first privateer and top Welsh crew.

“I’m absolutely thrilled with this result” said an elated Tom at the finish. “To record my best ever result on a World Rally Championship round is just what I had hoped for, especially against such a high quality field of drivers in R5 cars.

“After a challenging start and having to cope with difficult conditions, Dale and I just kept up a consistent pace and from Friday afternoon onwards we knuckled down, fought our way up the leader board stage-by-stage and made sure we got the job done on Saturday so that we were where we wanted to be on Sunday and able to challenge for a top-ten overall position.

“I really have to thank everyone who made this event possible: For Dale and all the work he did inside the car and the PCRS team for all they did outside it. A truly fantastic job all-round. I also have to thank our sponsors and supporters for their invaluable contributions: Hyundai Motorsport Customer Racing, Pirelli tyres, Trailhead Fine Foods and their Get Jerky snack brand, Cambrian Training, Shukers Hyundai of Aberystwyth, Intervino personalised gifts, Go Fetch pet transport and Atech Racing. We couldn’t have done it without you!” 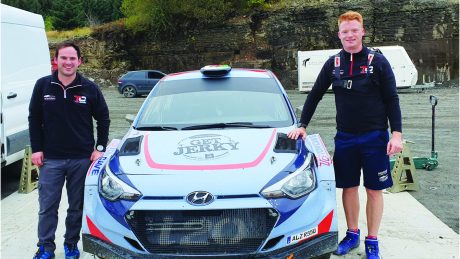 Fresh from his successful British Rally Championship campaign, where he won three of the season’s six rounds and claimed dominant victory on the final event in Scotland a few weeks ago, Aberdovey driver Tom Cave now sets his sights on the Wales Rally GB. Britain’s round of the World Rally Championship starts on Thursday afternoon (3rd October) from Liverpool and finishes on Sunday (6th October) in the rally’s host town of Llandudno.

Accompanied for the first time by Dale Furniss from Llanfyllin, Tom will drive the same Philip Case Rally Sport prepared Hyundai i20 R5 that he used to such great effect in this year’s BRC. Consequently, he will be looking to continue the momentum from his season in the UK to the world status event and emulate the pace he showed last year when he set four fastest-stage times in the RC2 class, beating many leading world championship regulars in this fiercely contested category.

“I start this year’s Wales Rally GB in a much better place than I did last year, as I come straight from a season in the British Rally Championship driving the same car. Even without the experience of a full season in 2018, I was very pleased to be able to set four fastest times against the regular WRC2 drivers and challenge for a podium position until we retired the final day. I’m therefore looking forward to another good run this year, although the quality of the entry is really high so it’s going to be no easy task.”

This year will see Tom’s tenth Rally GB start. His first was in 2008 when, just a few days after his 17th birthday, he became the youngest ever driver to contest the event. His best result was in 2017, when he finished third in the WRC2 category, 13th overall and top privateer driver.

“It’s going to be an interesting few days. The stages are in an area I’m familiar with, which helps, but it’s never that straightforward. It’s Dale Furniss and I’s first event together and we’re on Pirelli tyres for this event, so there’s going to be some acclimatisation. Having said that, testing has gone really well; the car felt great and everything worked perfectly, so we’re as ready as we can be. I can’t wait!”

The Wales Rally GB follows a new format this year, with the ceremonial start taking place on Thursday from Liverpool’s historic Waterfront at 16.00. Following a spectator stage at Oulton Park Circuit that evening, teams head to the service area in Llandudno for the overnight halt.

Friday features nine stages in northwest Wales forests, with a further seven in mid-Wales on Saturday followed by four forest stages and a run around the Great Orme asphalt road on Sunday. The finish ceremony takes place in Llandudno at 13.30.