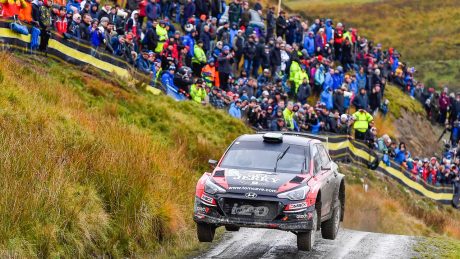 After setting four fastest stage times and regularly posting top three times within fractions of a second from that of the factory-supported drivers, Tom Cave’s performance on this year’s Dayinsure Wales Rally GB underlined his true potential as a front-runner in the international RC2 category of the FIA World Rally Championship.

Having concluded a deal to drive a Philip Case Rally Sport prepared Hyundai i20 R5 and attracting support from a variety of backers a few weeks before the UK’s round of the WRC, Tom carried out a short but successful test on the Monday before the event. Even without much seat time under his belt, the 26-year old from Aberdovey and co-driver James Morgan from Hirwaun were matching the pace of the top seeded crews from the word go.

Following a short spectator stage near Rhyl on Thursday evening, they went on to set the second-fastest RC2 time on the first two of Friday’s eight stages in the North Wales forests. However, a puncture in SS4 slowed Tom a little and, having used the one and only spare wheel, he was wisely cautious through the morning’s remaining pair of stages held in a slate mine where the flint shards on the edges of the road could have easily caused another tyre-related issue.

Having completed the afternoon’s three forest stages that were a repeat of the morning’s trio, Tom and James pulled into the Deeside service area for the overnight halt fourth in class and impressively, lying 13th overall amongst the works-assisted crews.

The second full day of the rally took teams to Mid and North West Wales for a series of stages that were more familiar to the Welsh pair and, in SS11 – a 20km run through Sweet Lamb and Hafren – they claimed their first RC2 stage win. But then, on the very next stage Dyfi, a slide to the edge of the road on a fast left-hander resulted in getting caught on a tree stump.

With help from a group of spectators they managed to get the car back on the stage, although with over ten minutes lost the chance of a podium finish was now out of the question. Therefore, Tom’s strategy changed and instead of targeting a top overall result, he and James would aim to show what they could do by setting as many top stage times as possible. With only minor cosmetic damage to the rear of the Hyundai, the afternoon saw them go on to achieve their quest by setting another two fastest RC2 times before the overnight halt.

The PCRS team made the most of the limited service time available and consequently, returned the car to 100%. Then, on Sunday’s opening stage, Tom repaid their efforts by setting the quickest time by a clear three seconds ahead of class leader Kalle Rovanpera in a Skoda. It was an impressive performance, bearing in mind it was only a 10km run!

Another top-three time on the 15km Power Stage followed, but when he and James went to swap the wheels from front-to-back before the circumnavigation of the Great Orme at Llandudno, they noticed oil on and around the sump guard. Taking into account their position in the rally, they decided to retire from the event rather than risk any significant mechanical damage.

Whilst it wasn’t the ideal outcome they were hoping for, Tom, James and the rest of the team were extremely satisfied with the way they had represented themselves and their sponsors on the event. Consequently, they came away from the rally in the knowledge that given the opportunity, they can be competitive at international RC2 level.

“It’s a strange feeling, as this is the first time I’ve retired from an event but still feel upbeat about what’s just happened”, explained Tom. “Yes of course, it would have been great to stand on the podium and receive the accolade a top three position brings with it, but I believe our times showed what we can do, even against the full-time drivers and factory-supported operations.

“For us, this event has represented a great team effort and I really must thank everyone involved: PCRS for providing us with a car that ran perfectly throughout the event, which is a fantastic achievement. Also DMACK for supplying tyres that worked exceptionally well in the conditions and helped us to set the times that we did.

“We could not have entered the rally without the invaluable help of our sponsors: Trailhead Beef Jerky, who not only backed us in order to launch its new snack, but provided all of the event’s 2000+ volunteer marshals with a complimentary pack of products. Further support came from DMACK, Intervino, H N Nuttals Foodservice, Humphreys & Foulkes of Newtown, Atech Racing, Walero, Speedline Corse and Cave Equine, to whom we are most grateful.

“I must also thank our supporters and followers, be it at the side of the stage cheering us on or keeping up to date with our progress on social media. We hope you enjoyed watching!”

Tom and his team are currently working on plans for 2019 and hope to make an announcement soon. 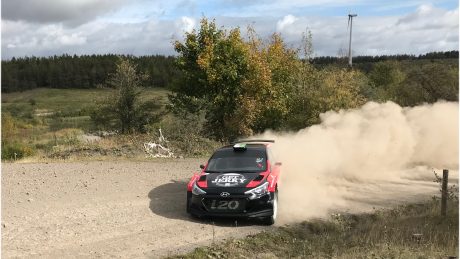 Following a successful test in South Wales on Monday, Tom Cave says he feels ready for his biggest challenge of the year, the Dayinsure Wales Rally GB – Britain’s round of the FIA World Rally Championship – that takes place this week.

Monday’s test saw the 26-year old from Aberdovey back behind the wheel of a Hyundai i20 R5 for the first time since finishing third in the WRC2 category on the Neste Rally Finland in July last year. It didn’t take long for Tom to re-acclimatise himself to the car and, with just a few tweaks made by the Philip Case Rally Sport crew, he was quickly up to competitive pace.

“It was great to back in a Hyundai again”, said Tom. “The one I’m using on Rally GB is a 2018 model and it felt even better than the cars I drove last year in the British Rally Championship and Finland. I was very happy with the test. I came away feeling comfortable in the car and confident we can fight for class honours.”

In addition to setting up the car, Monday was also an opportunity for Tom to take some of his sponsors for a passenger ride they’ll never forget! In the warm autumn sunshine, guests were treated to a high speed run through the test stage and by the look on their faces when they got out of the car, without exception all of them said they were thrilled by the experience.

“It was great to be able to offer our sponsors the opportunity to sit alongside and find out what it’s like to drive through a forest stage at speed. Many of them had never been in a rally car before and to say that they were blown away I think would be an understatement. Events like this are so important, as the support from these companies and individuals has enabled me to take part in this year’s Wales Rally GB – and for that, I’m extremely grateful.

“Because I haven’t entered as many rallies as I would normally this year, it would be fair to say that I’m looking forward to this event more than ever. Living in north Wales, I feel at home on the stages; the car feels great and James (co-driver) and I are as ready as we can be. I can’t wait to get started!”

The Dayinsure Wales Rally GB gets underway on Thursday (4th October) evening from the Deeside service park, before the Visit Conwy Tir Prince spectator stage near Rhyl. Friday features eight stages in north Wales, with Saturday comprising a further nine in north and mid Wales, one of which runs just a few miles from where Tom lives.

Sunday is the final day, when the route heads back to north Wales for four stages in forests directly south of Llandudno followed by the the fifth and final stage around the Great Orme headland with the flying finish along the sea front.