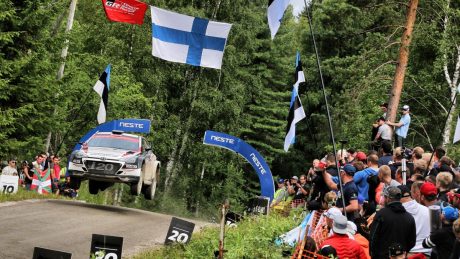 Tom Cave and co-driver James Morgan achieved what they set out to do in this weekend’s Neste Rally Finland – and that was to finish on the WRC2 Class podium. Driving a New Generation Hyundai i20 R5, they also claimed a credible 15th place overall in the event that represented the ninth round of the FIA World Rally Championship.

Having competed in Finland twice before when contesting the DMACK Drive Trophy in a two-wheel-drive car – and winning the series there in 2015 – Tom was pleased to have secured the opportunity to drive a more powerful four-wheel-drive machine this time around. Tom from Aberdovey and James from Hirwaun completed two days of successful testing in the car, which is owned and run by Sarrazin Motorsport, earlier this week.

The official pre-event shakedown on Thursday morning also went well and consequently, everything was set for the start of the rally in Jyväskylä and the first stage – a short spectator-friendly affair the town’s central park – that evening.  With the opening test completed, the rally restarted on Friday morning with 12 more traditional-style Finnish forest stages to the west and north of the town.

Not completely at-one with the feel of the car on the gravel roads that were made unpredictable due to the morning’s rain, Tom and James were to follow a calculated game plan that saw them 6th in WRC2 and 21st overall at the lunch time service halt. A few adjustments and a fresh set of Dmack tyres made a significant difference in the afternoon, but just as the Welshmen began to charge, five kilometres into SS10 they encountered a minor brake problem.

By using the gears and a considerable amount of skill, Tom managed to get the car to the end of the stage, where he and James were able to effect repairs and get more braking force into the system. Remarkably, although off the front-running pace, they only dropped around a minute through the remaining three stages and consequently maintained their position.

Once back in the service park, the team found and fixed the issue. It was therefore business as usual for Saturday’s eight stages and, having driven all of them before including the classic Ouninpohja stage that was tackled once in the morning and again in the afternoon, Tom admitted he was looking forward to what lay in store.

His positive approach to the day’s proceedings was soon rewarded when, following the Ouninpohja stage – the third of the day – he and James emerged third of the WRC2 runners and 17th overall. Following a further push in the afternoon, it was clear that the time previously lost was unlikely to be gained against the Finnish driver Jari Huttunen in first and Frenchman Quentin Gilbert in second.

So, for Sunday’s four stages, consolidation was the name of the game and, with Gilbert now over a minute ahead and Welsh compatriot and British Championship sparring partner Osian Pryce over two minutes behind in fourth, the focus of attention for Tom and James was to ensure they brought the Hyundai home in a podium position. And that’s exactly what they did.

As they drove over the finish ramp in front of 1000s of spectators in the centre of Jyväskylä under the Baltic summer sunshine on Sunday afternoon, the realization of what they had achieved finally sunk in:

“While this is one of my favourite rallies and includes some of my favourite stages, it’s still a really tough event. So, with a car that was new to us and with the Hyundai i20 R5 making its debut to this event, I’m extremely pleased with the result.

“WRC2 is the highest and most competitive category for R5 cars in the world. So, to get to the finish having overcome the issues we had during the event, I feel very proud to come away with third in WRC2, finish15th overall and to have given the i20 R5 its best result in a WRC round so far.

“My motto is: ‘teamwork makes the dream work’ and that phrase has never been more appropriate. I would therefore like to thank all the people and organisations involved for giving us the opportunity to compete in Finland and achieve this result: Dmack Tyres, the Trefeddian Hotel, Atech Racing, Walero Motorsports and Hyundai Motorsport Customer Racing.

“I must also congratulate the Rally Finland organisers for putting on such a good event, plus I have to thank the Sarrazin Motorsport team for their hard work and of course, James, who has done far more than just co-drive this past few days.”

Further news regarding Tom’s 2017 motorsport campaign will be announced before the end of August.