Top performance but tough outcome for Tom in Ulster 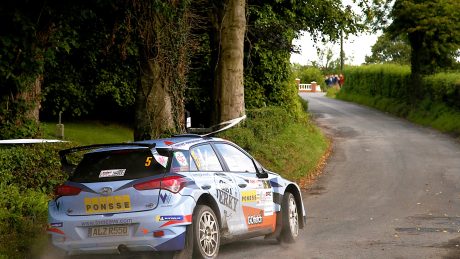 Following another front-running performance in a round of the British Rally Championship, Tom Cave’s efforts and the promise of a podium result on Saturday’s (17th August) Ulster Rally ended one stage from the end, when contact with a wall stopped him and co-driver Dale Bowen in their tracks. But having set regular top-three stage times, as the Welsh pair challenged to maintain their championship lead, the outcome clearly didn’t match the potential.

Having won two rounds, scored a second place and recorded a DNF apiece this season, Tom and his main rival Matt Edwards headed to the Newry-based, Today’s convenience store sponsored event tying for the British Rally Championship lead. So, with the Ulster encounter representing the fifth of six rounds, it was all to play for between the two title aspirants over the nine stages and 93 competitive miles that lay ahead of them.

Following a ceremonial start on Friday evening, the competitive action got underway on Saturday morning with the first loop of loop of three stages. Whilst damp patches in the opening stage did not persist in the second, grip levels from one section to the next were still difficult to predict.

However, Tom and Dale were right on the pace and well placed to challenge for the result they were looking for when he and Dale pulled into the first service halt of the day. At that point they were lying 2nd in the British Championship standings – 9.8 seconds behind Edwards – and third overall – 12.2 seconds behind rally leader, Craig Breen.

Changing onto a harder compound tyre for the second loop of the same three stages helped in some cases, but not in others. Whilst an overshoot into a field in SS5 cost Tom and Dale precious seconds, a fastest BRC time in SS4 and an overall fastest time in SS6 did much to restore some of the deficit. However, the gap between them and Edwards was now 19.3 seconds, which meant that a return to the softer tyres and a consolidation of positions was the order for the final loop.

But when it comes to rallying, the best laid plans don’t always come to fruition and on the approach to a high-speed left hander near the end of stage eight, Tom felt the car slide a little wider than it had done before. Whilst he straightened it up for the exit, a section of a wall that jutted out caught the front corner of the car, removed a wheel and spun the Hyundai round in the road. Thankfully both Tom and Dale were unharmed, but the same could not be said for their car and they had no choice but to retire on the spot.

“I really didn’t think we were going to hit the wall, but the last bit of it stuck out further than the rest and although we just clipped it, the outcome was terminal”, explained Tom. Of course, it’s disappointing to end the rally that way, but if we hadn’t been on the front-running pace it would have been even more disappointing, so we certainly take away some positives and I congratulate Craig and Matt for the overall and BRC wins respectively.

“Once again, the PCRS team provided us with a car that was competitive and reliable – as it has been all season – although what happened in stage eight was not the best way to show our appreciation of their fantastic efforts, of course.

“With just one round of the British Rally Championship to go, it’s going to make it extremely tough to claim the title. However, we shall still give it our best shot.”

The sixth and final round of this year’s British Rally Championship takes place on 14th September and sees the surface return to gravel for the Dalbeattie and Castle Douglas based Galloway Hills Rally. 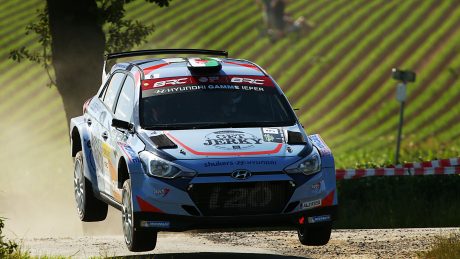 Ahead of this Saturday’s (17th August) Ulster Rally – sponsored by Northern Ireland-based convenience store chain Today’s – Aberdovey driver Tom Cave prepares what could be the most significant event of the season.

Tom currently shares the British Rally Championship lead with fellow Welshman Matt Edwards, both of them level-pegging on 68 points and with two wins, a second place and a DNF apiece, the penultimate event in the six-round season is shaping up to be a pivotal point in the chase for the title.  Therefore, with the nine timed special stages providing 93 miles of competition over the fast and technically demanding Ulster asphalt, the tension is building for an epic encounter between the two title aspirants.

“It really is a case of who dares wins this weekend”, explains Tom. “Both Matt and I are at the top of our game and we’ve been very evenly matched so far this year, so there’s no room for error and neither of us can afford to relax.”

Tom will drive the PCRS supplied and prepared Hyundai i20 R5 that he has campaigned in all this year’s previous four rounds and took to victory on the West Cork Rally in March and the Pirelli International Rally in April. Once again, the 27-year old will be co driven by Dale Bowen from Hirwaun.

The Welsh pair will head across to Northern Ireland on Thursday to carry out a pre-event test in the Hyundai on roads that will replicate those that will confront them two days later. Friday will see the crews perform their recce runs through the stages, with the event’s ceremonial start from Albert Basin in Newry taking place from 8.45 that evening.

Competition will begin at 8.30 on Saturday morning with a loop of three stages tackled before the first service halt of the day in Newry. The same trio of stages are repeated before second service halt and again afterwards, with the finish scheduled for 17.30 at Newry High School.

“We are in a great position to challenge for the win on Saturday, so Dale and I are extremely focused on what we need to do. Having finished runner up twice before in 2012 and 2016, I would really like to get the British title under my belt – not only for Dale, the team and I, but for Hyundai and all our sponsors – so rest assured, we’ll be giving it everything we’ve got.”