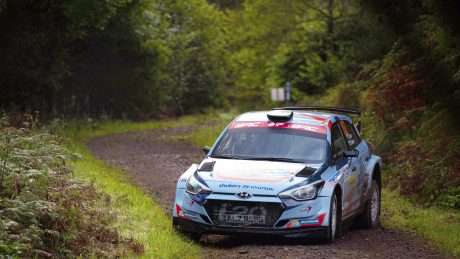 Tom Cave delivered a perfect performance on Saturday’s (14th September) Armstrong Galloway Hills Rally by setting the fastest time on all of the event’s eight stages and in doing so, recorded his third victory of the season by nearly a minute. It was all he and co-driver Dale Bowen could do in order to give themselves the best chance of claiming this year’s British title, but with their main rivals Matt Edwards/Patrick Walsh finishing third, it meant they end the season in second place.

Based in the forests of southwest Scotland, the sixth and final round of this year’s British Rally Championship comprised nine stages and 71 competitive miles over some of the most demanding gravel roads in the UK. With Edwards ahead on points following round five, it meant that if he finished seventh or higher, even if Tom won the rally, Edwards would still secure the title.

As cars set off from the start near Castle Douglas on a bright and sunny morning, Tom knew what he had to do to give himself the best chance of securing the title. And he did just that. Stage-after-stage, he and Dale set the pace, posting fastest time after fastest time, never putting a foot wrong in the process. The Michelin tyres worked well and the Philip Case Rallysport prepared Hyundai – which had been rebuilt following the previous round – ran faultlessly.

With organisers cancelling the ninth and final stage, Tom and Dale crossed the finish line having set eight out of eight fastest times to record their third British Rally Championship victory of the season.  They ended the day 54.9 seconds ahead of Jonny Greer/Dai Roberts and 2 minutes 16 seconds ahead of Edwards/ Walsh, who had also done exactly what they needed to do and finished third.

At the finish, Tom said:

“To be quickest on all the stages and win without any problems is the best result you can hope for. We pushed from the start and did everything we could today to keep a grip on the title, but the difference in points between Matt and I was just too much. We didn’t lose the title today, it was the DNFs on round one, the Cambrian Rally and round five in Ulster that set us back.

“To have completely rebuilt the Hyundai in three weeks following our off in Ulster – and then for it to run faultlessly throughout this event – is a fantastic achievement and testimony to the PCRS team’s hard work and professionalism. Today’s win is for them.

“After three victories – one on asphalt and two on gravel – we’ve proved that the Hyundai i20 R5 is capable of winning in the British Rally Championship. And whilst we didn’t quite get our hands on the title, it’s great to have finished the season on a high.”

“There are so many people I would like to thank for making our 2019 British Rally Championship campaign happen: Trailhead Fine Foods and its Get Jerky snack brand, Cambrian Training, Hyundai Motorsport Customer Racing Michelin Motorsport, Shukers Hyundai of Aberystwyth Ponsse UK, H.N. Nuttall Foodservice, Go Fetch Ltd, Intervino and Atech Racing. We couldn’t have done it without you!”

Tom now looks forward to his next challenge, the Wales Rally GB – Britain’s round of the World Rally Championship – that takes place between 3rd and 6th October. 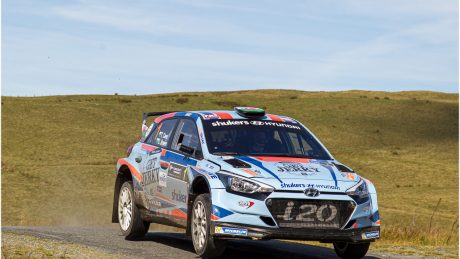 Tom Cave and co-driver Dale Bowen took time out of their British Rally Championship Campaign on Sunday (8th September) to take part in a brand new and groundbreaking event: the Get Connected Rali Bae Ceredigion. Having overcome brake issues in the morning’s four stages, driving their PCRS prepared Hyundai i20 R5, the Welsh pair fought back to challenge for the lead in the afternoon and crossed the line in second place.

With the inaugural running of the first closed road stage rally in Wales based in Aberystwyth, just down the coast from his home town of  Aberdovey, it was an event Tom couldn’t miss. Seeded at number one and therefore running as the first competitor on the road, he made history by being the first driver to ever compete in a stage rally on a closed public highway in Wales.
An issue with his car’s front brakes in the first of the day’s eight stages in the Cambrian Mountains meant that Tom was on the back-foot from the start and dropped time to fellow Welshman Osian Pryce in a similar car. With the PCRS team fixing the brakes in the lunchtime service halt at Aberystwyth University, Tom set out to make up for lost time in afternoon’s loop, which were a re-run of the four stages used in the morning.

Following a determined drive over the technically demanding roads, Tom and Dale were able to reduce the gap to 7.7 seconds by the time they returned to the finish outside the National Library of Wales in Aberystwyth.

“Even though we had a few issues in the morning and it was a shame we could not gain the lead in the afternoon, I really enjoyed the event and driving a great car on such great stages. The organisation of the rally was fantastic and everyone involved should be congratulated for a job well done. I’m already looking forward to next year!”

Tom now focuses on the final round of the British Rally Championship, the Armstrong Galloway Hills Rally, which takes place on Saturday (14th September). Based in south west Scotland, the event features a competitive distance of 75 miles on gravel forest roads in the region.

After sharing the championship lead with his main rival Matt Edwards, a DNF on the Ulster Rally means that Tom has a fight on his hands to claim the title this weekend and will need to target a win to have the best chance of lifting the spoils:

“I’m looking forward to competing on a gravel surface again and with Matt in a stronger position to take the title, we have to target a win this weekend. Because he’s currently on 93 points and I’m on 68 with a potential 31 up for grabs, Matt has to finish seventh or higher to secure the title. It sounds like a long shot, but as it’s been proved time-after-time in this sport, nothing is ever certain – and if there’s a window of opportunity then rest assured, I’ll be going for it.” 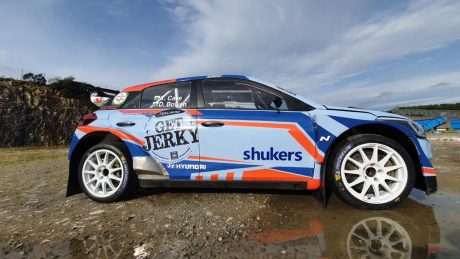 Tom Cave will travel just a few miles down the coast from his hometown of Aberdovey this weekend to the more southerly seaside resort of Aberystwyth for Sunday’s (8th September) inaugural running of the Get Connected Rali Bae Ceredigion.

The event is the first ever stage rally to be held on closed public roads in Wales and therefore, as Tom and his co-driver Dale Bowen from Hirwaun are seeded at number one, they will make history by being the first car to compete on a rally of this kind in their home country.

The event features a route that passes through stunning scenery in the Cambrian Mountains, over roads that have a reputation for their driving appeal and demanding nature.

“From what I’ve heard, the stages are very technical, so it’s going to be interesting to see what the roads are like at competitive speed”, explains Tom.

“Being so local, I really wanted to take part in the event and support the organising team, who I know have worked extremely hard to make it happen.”

Tom and Dale will contest the event’s 44 competitive miles in a similar Hyundai i20 R5 to the one they have been successfully campaigning in the British Rally Championship this year. Tom’s car will – as it has been all season – be supplied by leading rally preparation specialists PCRS, who’s professionalism and performance has seen the team become a highly respected operation within the sport.

“There’s a few crews in R5 and WRC cars this weekend, so there should be a good battle between us and, with this being the first running of the rally, it’s going to level the playing field. There’s a real buzz about the event, so I’m really looking forward to it.”

The rally is based at Aberystwyth University, which hosts the event HQ, start, finish and service area. Tom will lead the 120-car field over the start line outside the National Library of Wales at 9.30am and, after contesting a loop of four stages in the morning, will return to the campus for the lunchtime service halt. Then, following a re-run of the morning’s quartet of stages, crews will return to the National Library for the finish from 3.30pm.