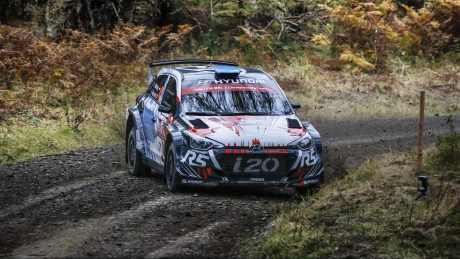 As announced a few weeks ago, Tom Cave and his co-driver James Morgan will debut a Hyundai Motorsport-built New Generation i20 R5 in the Prestone MSA British Rally Championship on this weekend’s Pirelli Rally (29th & 30th April).

They head to the second round of the UK’s top rally series lying second in the championship standings after an impressive performance on round one, the Border Counties Rally. Having led the event at the halfway stage, conditions and the determination to secure a good result saw them end a tough but successful weekend in second place.

Tom (from Aberdovey) will drive the Hyundai for the first time in advance of the Pirelli Rally when he and co-driver James Morgan (from Hirwaun) test the car in Kielder Forest on Thursday (27th). Whilst the i20 R5 is new to them both, competition at rallying’s highest level in the UK is not and therefore their hopes are high for another top result, as Tom explains:

“It’s a brand new car and for us, a brand new team, so this will be a learning curve for everyone. The whole package looks great and I’m pleased to report that everything is coming together well. We have a test day planned for Thursday when I’ll be driving the Hyundai for the first time and I’m really looking forward to it.

“I’m familiar with the Kielder stages, so for James and I the plan is to carry on from where we left off on round one. While we want to make sure we stay in the running for the championship, we also want to do the best job we possibly can for everyone involved with this exciting project.”

The Pirelli Rally starts and finishes in Carlisle. The route features 100 competitive miles in Kielder Forest, split into four stages on Saturday afternoon followed by a further four stages on Sunday morning.