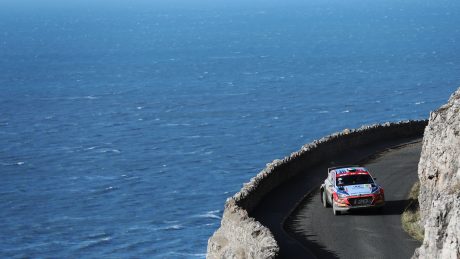 Tom is looking forward to returning to the event where he posted his first of three British Rally Championship victories last year, the Clonakilty Park Hotel West Cork Rally, which takes places this coming St Patrick’s Day weekend – 14th & 15th March. He will be partnered by co-driver Dale Furniss.

In a nail-biting, final stage shoot out in 2019 against fellow Welshman Matt Edwards, driving his PCRS prepared, Get Jerky supported Hyundai i20 R5, Tom and his co-driver on that occasion James Morgan secured an impressive win by a margin of 4.8 seconds. Scroll forward to 2020 and the rivalry is rekindled, with Edwards also returning to West Cork in a Ford Fiesta R5.

But the competition for BRC honours this year doesn’t end there, with the appearance of another Welsh driver Osian Pryce in a VW Polo R5, WRC regular Rhys Yates in a Fiesta, 2019 Billy Coleman Award winner Josh McErlean – also in a Hyundai – and Ollie Mellors driving a Proton Iriz R5.

Tom sets the scene: “To win the British Championship round and finish third overall against so many top Irish drivers last year was fantastic and very satisfying. Looking at the entry list for this year, the competition is just as tough – if not tougher – so we’ll need to be on our game and as well prepared as we can be, make sure the pre-event test and recce go well and then give it our best shot.”

Tom and Dale initially led the opening round of the British Championship, last month’s Visit Conwy Cambrian Rally, before clipping a rock and breaking a wheel. The subsequent time lost pushed them outside the top-ten, but a fight back through the field saw them end the day a credible sixth.

“We need to keep our championship hopes on track and to do that, scoring points is all-important”, explains Tom. “The West Cork Rally is a demanding event with 14 stages and 135 miles on closed public roads. So whilst it’s not a sprint, you can’t afford to back off, especially with strength of competition we’ll be up against. I can’t wait!”

Following a ceremonial start in Clonakilty on Friday evening, the action gets underway on Saturday morning and features eight stages providing 68 competitive miles. Sunday’s distance is similar, with its six stages covering 67 miles of competition.