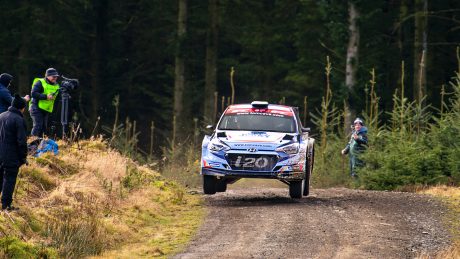 On the opening round of this year’s British Rally Championship – Saturday’s (16th February) Visit Conwy Cambrian Rally – Tom Cave and co-driver Dale Bowen clearly established themselves as title contenders, when they delivered an impressive front-running performance on all of the event’s ten stages. However, three punctures in the final two stages meant they were unable to complete the road section to the finish line in Llandudno – an underserved end to an otherwise well-judged and faultless day’s competition.

For Tom (from Aberdovey), the Northwest Wales event represented the start of new season, in a new car, with a new co-driver, who is relishing the opportunity of contesting a full season in this year’s British Rally Championship. Following a highly successful test earlier in the week when he drove the PCRS prepared Hyundai i20 R5 on Michelin tyres for the first time, he and Dale (from Hirwaun) were well prepared to hit the ground running for the first of Saturday’s stages in forests that are synonymous with rallying in the region.

And hit the ground running they did, posting the third-fastest time in the opening stage, a performance that saw the Welsh pair just 3.2 seconds off the then leaders David Bogie/John Rowan and 0.8 seconds from 2018 British Champion Matt Edwards with co-driver Patrick Walsh. Tom and Dale then went on to set equal fastest-time on SS2 and second-fastest on SS3, which meant they held second place – just 5.2 seconds from Edwards/Walsh – when they booked in to the first service halt of the day in Llandudno.

Tom reported all was going exceptionally well, although the stages were more slippery than expected, with varying levels of grip.

With the onset of rain during the second loop of four stages, traction became even more of an issue. Even so, Tom and Dale continued to set top-three times before booking into the second service halt, where the PCRS team fitted spot lamps and a set of softer-compound tyres for the final three-stage loop in the evening.

The nighttime encounter began well, with Tom and Dale beating Edwards/Walsh – who were now in the lead – by nearly two seconds through stage eight. Although being slowed by a puncture about a mile from the finish of SS9, Tom and Dale still held on to their second place as they lined up to start the tenth and final stage.

However, just half-a-mile into the 4.81-mile run through Elsi Forest, a second puncture beset the Hyundai crew, the tyre loosing all of its air immediately. Nevertheless, Tom managed to get the car to the end of the stage and even with the consequential loss of time, he and Dale were fifth and still in a valuable point scoring position.

But there was more frustration to come, when a third puncture manifested itself during the transit section on the way back to the finish control in Llandudno and, with no more spare wheels available, they had no choice but to retire with just a few road miles left to go. It was not the result that the team had anticipated or indeed deserved, following a performance that had all but assured a podium finish, as Tom explains:

“I just can’t believe our rally ended that way. I’ve never experienced three punctures in an event before – let along in two stages!

“However, I’m really pleased with the way things went up until that point. Considering it was the first time in this car, my first event since October’s Wales Rally GB and Dale and I’s first rally together at this level, to be in with a shot of the lead and claim two fastest times, really sets the scene for the season ahead.

“We’ll now investigate what happened, take on board the positives – of which there were many – and regroup so that we’re even better prepared when we travel to Ireland next month.”

The second round of the British Rally Championship is the Clonakilty-based West Cork Rally, which takes place on 15th & 16th March and provides the first asphalt encounter of the season.

Welsh Rally driver Tom Cave is pleased to confirm that he will compete for honours in this year’s British Rally Championship. He will contest all of the season’s six rounds behind the wheel of a Hyundai i20 R5, supplied and prepared by the PCRS team that ran a similar car for Tom on the Wales Rally GB in October.

The 2019 British Rally Championship season kicks off on Saturday 16th February with the Visit Conwy Cambrian Rally, when Tom will be joined by fellow Welshman Dale Bowen as co-driver.

“We’ve been working hard behind the scenes to make this year happen, so I’m delighted that everything has come together just in time for the first round and I really have to thank everyone who is supporting our campaign this season.

“Having been runner up in 2012 and 2016 and third in 2013, the British Championship is something I would really like on my CV, so it’s great to have the opportunity to challenge for the title this year.”

Support for the season comes from Trailhead Fine Foods, who teamed up with Tom for last year’s Rally GB to launch their new Get Jerky range of snacks. Also continuing their backing from 2018 is Manchester-based HN Nuttall Foodservice, Atech Racing and Walero. Adding their names to the list of supporting partners are Michelin Motorsport and Hyundai Motorsport Customer Racing.

“Philip Case Rally Sport are supplying and running the car for the whole season. We worked very well together on Rally GB, so it makes complete sense to continue the association.

“I’m delighted to be back in a Hyundai and, after my previous outings in the i20, I feel very much at home in the car. With the upgrades that have been made over the two years since I first drove it on the Pirelli Rally in 2017, I think we can really push for the title this year. I can’t wait to get started, especially as the first round is my home event!”

The Visit Conwy Cambrian Rally gets underway at 8.00am from Mostyn Street in Llandudno. Tom and Dale will be the fourth British Championship crew to leave the start before heading into a series of North Wales forests that are synonymous with the sport of rallying.

The route, which comprises 66 competitive miles, features three stages in the morning followed by a service halt in Llandudno. A further five stages take place in the afternoon followed by another service halt and, for BRC competitors, an additional two nighttime stages before the event finishes where it began later that evening.