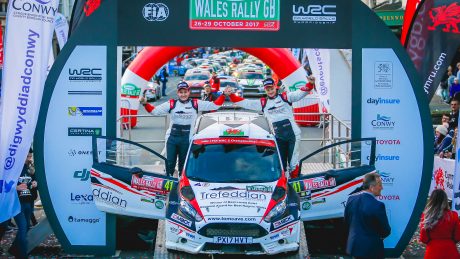 Tom Cave from Aberdovey, together with his co-driver James Morgan from Hirwaun, scored an impressive third-place finish in the fiercely contested WRC2 category on this year’s Dayinsure Wales Rally GB. After three days of competition in the forests of Mid and North Wales, driving their Dom Buckley RSC prepared and M-Sport built Ford Fiesta R5, they crossed the finish line in Llandudno yesterday (Sunday 29th October) afternoon to claim their second podium position in as many FIA World Rally Championship events.

The rally started from the centre of Chester on Thursday evening and, to get proceedings off to a spectacular start, a short spectator stage watched by 1000s of fans was held at the Tir Prince leisure park and trotting track near Rhyl. But it was Friday when the real rally action began, kicking off with three classic stages in mid-Wales: Myherin, Sweet Lamb and Hafren.

In the autumn sunshine – a welcome feature on this annual event – a strong run through the first loop saw Tom and James fourth in WRC2 and lying 17th overall after SS4. Then, on SS5 they moved up a place – even though they had a scare when the car’s engine cut out momentarily at the end of the stage. They consolidated their position over the day’s remaining two stages and, when they returned to the Deeside service park that evening, they were 46.4s behind already crowned 2017 WRC2 Champion Pontus Tidemand in a Skoda and only 3.3s away from Frenchman Eric Camilli in second place.

Saturday morning featured a loop of four stages, this time in the equally as classic north-Wales forests of Aberhinrnant, Dyfnant, Gartheineog and Dyfi – all of them Tom regarding as local rally territory. With mist and drizzle greeting crews, conditions were certainly different than that of the day before and consequently, with far less traction available, Tom thought he was off the pace – only to find that everyone else was experiencing similar issues. In fact, he and James were in the ascendancy and went ahead of Camilli on stage 11, the first run through Dyfi and then went on to set the fastest WRC2 time in SS13 – the second run through the same 25.86km stage.

The day of intense forest action was punctuated with a 1.8km blast in the grounds of Cholmondeley Castle on the park’s asphalt roads – another stage designed to for the less hardcore rally fan. Following brief check and refuel at Deeside, it was then back to the forests for a second run through Aberhirnant and Dyfnant, but this time in the dark.

However the weather had changed and thick fog – sometimes cutting visibility to less than 10m – led Tom to report it was possibly the worst stage he had ever driven! The second stage was clear, but it had meant that time was lost to Tidemand who had had a clear run and was now 1m 43s ahead, with Camilli remaining seven seconds behind the Welsh pair when competitors returned to Deeside for the overnight halt.

With little chance of catching the Swedish team, consolidation was the order of the day for Sunday’s four stages: Alwen, Brenig and Gwydir, followed by a second longer run and through Brenig as the final ‘Power’ stage. But with Tom reporting the handling of the car felt different that it had done on Friday and Saturday, Camilli edged past on the 19th and penultimate stage. Try as they might, Tom and James could not retrieve the difference, but both were delighted they had achieved what they had set out to do, the final result seeing them finish 3rd in WRC2 category and 13th in the event overall.

“That’s mission accomplished’, said Tom as he and James lined up in Llandudno High Street before crossing the finish ramp. “We came here looking to end the season on a high, so to score a WRC2 podium in the two WRC events we’ve entered this year’s is fantastic, especially against world-class drivers that have factory support. It’s as much as we could have hoped for and I’m over the moon with the result.

“It’s even more rewarding to do it on your local event. The fans were out on mass and it was great to see so much support. Of course, it was fantastic day for Welsh rallying and I must congratulate Elfyn Evans and his co-driver Daniel Barrit for claiming their first WRC victory – and what a place to do it!  Congratulations also go to M-Sport (the team that builds the Fiestas) for securing both the World manufacturers’ and Drivers’ title on this event.

“As well as thanking the fans for cheering us on, I must also thank everyone who supported me. Firstly, to James for doing yet another fantastic job from the other seat; to Dom Buckley RSC for providing us with such a such a well prepared car; to DMACK for supplying tyres that not only helped us get onto the WRC2 podium, but enabled Elfyn to claim his outright win; to Walero for supplying the extremely effective temperature controlling base-layers; to Atech Racing for the top quality racewear and to the Trefeddian Hotel in Aberdovey.” 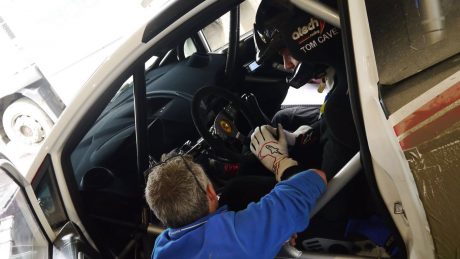 Determined to do the best he can on his home FIA World Rally Championship event, Aberdovey-based rally driver Tom Cave has been meticulously preparing for next week’s Dayinsure Wales Rally GB. His focus of attention will be firmly fixed on the highly competitive WRC2 category, a class that sees many of the world’s leading young drivers compete in R5 specification cars in their quest to secure a WRC seat.

“It looks like all of the forests we’ll be visiting on Rally GB I’ve driven before when they’ve been used on a national-status rally. In fact, looking at the route, one of the stages runs less than 10 miles away from where I live! However, you can never be complacent, as the conditions at this time of year can change extremely quickly. I therefore have to be sure I’m on the top of my game next week.”

In order to get acquainted to the new Dom Buckley RSC prepared Ford Fiesta R5 he’ll be using for this year’s Rally GB, Tom has just completed two full-day’s of testing: one in Carno Forest in north Wales and the other at the Sweet Lamb complex in mid-Wales.

“The weather was horrendous. It rained continuously during the first day of testing and then ‘Storm Brian’ did its worst during the second. I don’t think that in all my eight years of rallying, I’ve ever driven in conditions like that. While it was great preparation for what might happen on the rally, thankfully the forecast is looking dryer, which will be so much better for the spectators, marshals and organisers.

“Even though it was wet and slippery during the test, the car felt great. The latest version of the Fiesta is definitely an improvement on the previous one. It felt sharper and more responsive. The engine is stronger too. I must admit that having driven the Hyundai i20 R5 earlier this year, I was wondering what the latest Fiesta was like in comparison and M-Sport have obviously done a great job since the last time I drove one of their cars.

“So, with the Fiesta inspiring confidence, my regular co-driver James Morgan beside me, the rally using roads I’ve driven before and, having worked with the Dom Buckely RSC team previously, I’m feeling as ready as I can be at this point before the event. As I’ve said before, having been beaten by a Finn in Finland, I’m looking to turn the tables here in Wales. Bring it on!”

Sunday sees the route remain in north Wales and features another five stages before the ceremonial finish in Llandudno. All of the event’s service halts take place at Deeside Industrial Park.

Entered for the first time in 2008 driving a Fiesta ST – five days after passing driving test – and won the class by 15-minutes
This year will be seventh time on Rally GB
Third time driving Fiesta R5 on the event (previously in 2013 & 2014)
Best result: 12th overall, 2nd SWRC (2012), including six fastest stage times in class
Have driven every forest stage featured in this year’s rally and won the national rally that has previously used the same route 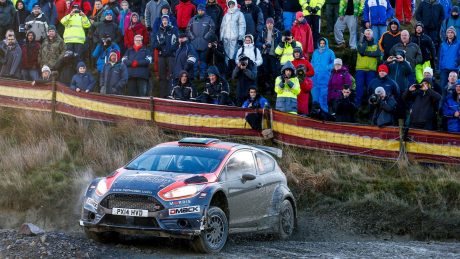 Tom will take part in next month’s Wales Rally GB, the UK round of the FIA World Rally Championship. With much of the event’s competitive mileage taking place in the north Wales forests, many of the stages represent familiar territory to Tom, who will be contesting this world championship qualifier for the fifth time.

Having impressed when driving a Hyundai i20 R5 earlier this year by leading various rounds of the British Rally Championship and finishing third in the WRC2 category on Neste Rally Finland, the talented 25-year old will return to a Ford Fiesta R5 for Rally GB. Tom has driven a similar car on the event twice before andhe finished second behind the wheel of an R5 Fiesta in the MSA British Rally Championship last year.

“After a season that promised so much, I am eager to round off my year by competing in my home world championship event against some of the best R5 class drivers there is”, explains Tom. “My most recent event was Rally Finland and, after finishing third in WRC2 and with a Finnish driver winning the class, I really want to see if I can turn the tables in Wales.”

Tom will be partnered on Rally GB by his regular co-driver and fellow Welshman James Morgan from Hirwaun, who also brings with him a wealth of experience when if comes to his home country’s forests. The car Tom will be using will be a brand new, latest specification Fiesta R5, prepared and run by Dom Buckley RSC – a team that Tom has worked with on previous occasions.

“I really enjoy competing in the Welsh forests, not just because they are close to where I live, but the stages are fantastic – some of the best in the world – and when you get them right, there’s nowhere that gives you the same buzz. So, with an area, a car, co-driver and team that’s familiar to me, I’m hoping it’s going to be a successful combination.”

The Wales Rally GB takes place from Thursday 26th to Sunday 29th October and represents the penultimate round of this year’s FIA World Rally Championship. The event commences on Thursday evening with a spectator stage at Tir Prince on the Flintshire coast, followed by six stages in mid Wales on Friday.

Saturday’s itinerary features six stages in the north Wales forests, plus a spectator stage at Cholmondley Castle. Sunday’s route continues the competition in north Wales and features another five stages before the ceremonial finish in Llandudno. As it has done in recent years, all of the event’s service halts take place at Deeside.