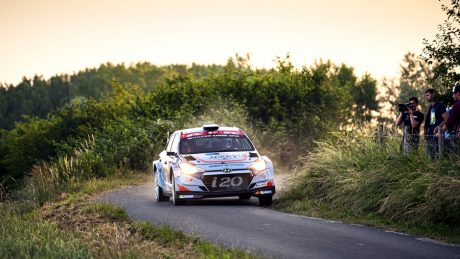 Tom Cave’s hard work behind the wheel of his Hyundai i20 R5 coupled with Dale Bowen’s efforts beside him on the notes, rewarded the Welsh pair with an impressive second place in the British Rally Championship standings and an overall result of seventh on Friday and Saturday’s (28th & 29th June) Renties Ypres Rally.

The outcome hots-up the race for the British title and with two wins, a second place and a DNF apiece, the scores put Tom on exactly same number of points as Matt Edwards with two of the six rounds remaining.

The Ypres Rally is the longest and fastest round of the season and was made even more demanding by the recent exceptionally hot weather. Adding further to the challenge for success in this hugely popular rally was a top quality field that featured a line-up of former and current World and European Championship teams.

Thursday evening’s practice and qualifying runs resulted in Tom and Dale claiming 10th place. Consequently, they had the final choice of starting position at Friday’s draw during the spectacular pre-start ceremonies in the town square and opted to run as first car on the road when the rally began later in the afternoon.

A measured start saw Tom and Dale enter the service halt after five stages holding an overall position just outside the top 10 and only eight seconds from BRC leaders Edwards and co-driver Patrick Walsh.  Now with a better feel of how the car and his Michelin tyres were working on the Belgium asphalt, a re-run of four of the first loop’s stages in the evening twilight paid dividends. Therefore, when the crews arrived back in Ypres for the overnight stop, Tom and Dale had elevated their overall position to seventh and importantly, were now heading the British Rally Championship field by an excitingly close 0.4 seconds.

The plan was ‘more of the same’ for Saturday’s 14 stages and with no let up in the ambient temperature, there was little doubt that a tough day lay ahead.  A perfect run through stage 10 to extend their lead was contrasted by a puncture and a damaged wheel rim on stage 11. This resulted in a cautious pass through SS12 and the loss of around 40 seconds, albeit Tom and Dale maintained a position in the rally’s top-ten and were still second of the British Championship runners.

With a two-minute buffer to that of the third-placed BRC crew of Alex Laffey and Stuart Lowden, Tom and Dale elected to still push so that if Edwards and Walsh had any issues they were in a position to pounce, but at the same time not spoil what would be an excellent result and claim a significant haul of points in the process. The remaining 11 stages saw Tom and Dale provide a demonstration of determined and consistent on-the-pace driving that was perfect for the circumstances – and in doing so, they increased their overall position to an impressive seventh and at the same time consolidated their second place in the British Rally Championship field by the time the event finished that evening.

“This is one of the toughest events I’ve ever done, said Tom at the finish. “The high temperatures coupled with the nature of the stages and the level of concentration and raw speed you need to succeed against drivers who are more familiar with the Belgium stages, was really intense. But of course, that makes our result even more satisfying and I’m delighted to have scored a third BRC podium finish and in doing so, stay at the top of the championship tables – albeit now sharing the position with Matt (Edwards), who drove an excellent rally.

“I must add that I could not have achieved any of this without by wing-man Dale Bowen, who did a fantastic job. I also have to thank and congratulate the PCRS team for providing us with the Hyundai that ran perfectly throughout the event, especially as this has been such a difficult week for them.

Tom and Dale will reconvene their successful partnership on 16th & 17th August, when they head to Northern Ireland for the Today’s Ulster Rally and the fifth round of the British Rally Championship.