Cave shows class with second place in the Borders 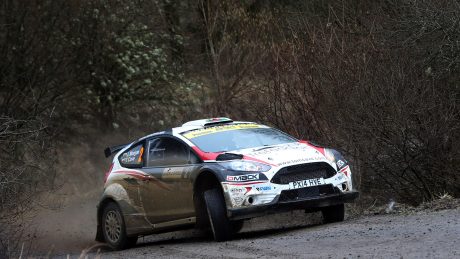 Having held an early lead in this weekend’s Border Counties Rally, round one of the Prestone MSA British Rally Championship, Tom Cave together with co-driver James Morgan, proved they were a class act when they finished the Jedburgh-based event in second place. It was only in the latter stages and slippery conditions they were denied an early season victory.

With Tom (from Aberdovey) and James (from Hirwaun) set to contest round two – next month’s Pirelli Rally – driving a New Generation Hyundai i20 R5, they acquired a Fiesta R5 (similar to the car they took to second place in the British Rally Championship last year with Spencer Sport) from Dom Buckley RSC specifically for this weekend’s event. Following a successful test on Thursday and setting second-fastest times on the first two Friday night stages in Craik Forest, it was clear that the Welsh pair were straight back onto the their 2016 pace.

Their performance in the early stages was good enough to see them head to the overnight halt leading the event by 2.8 seconds, ahead of Scottish driver David Bogie in a Skoda R5. Fired up to deliver more of the same on Saturday, they headed off for the first of the day’s seven stages ready for battle and, after setting the fastest time on stage four, they maintained their position at the front of the field.

But behind them Swedish driver Fredrik Ahlin (also in a Skoda) was gathering pace and took the lead on stage five whilst Tom and David Bogie were struggling for grip by virtue of being the first cars on the road. Then, on stage six, Bogie suffered the consequences of clearing the surface for the rest of the field when he hit a rock that was right on the racing line, the impact damaging his car, sending him off the road and into retirement.

Tom however, missed the offending obstacle and, whilst the Scot’s retirement meant he and James were now 44 seconds ahead of Osian Pryce in third, they were 21 seconds behind Ahlin. Not wanting to risk throwing away an impressive points haul that was to be bolstered by Tom playing his joker on this event, the strategy for the three remaining stages was to hold fast and therefore, be in a position to take advantage should anything happen to the leader.

As it turned out, nothing did happen to Ahlin and after a clean run through the final trio of stages, Tom and James returned to Jedburgh for the finish as runners-up. After the podium presentation, Tom said:

“Having led the event in its early stages, it proved we still have the pace to run at the front of the field, so I’m very happy with that. I’m also happy to finish second on an event that saw six different teams – including us – set a fastest time in one or more of the event’s nine stages.

“Yes, of course, James and I wanted to win, but with a new car and a new team on an unfamiliar event, it’s a very satisfying outcome.  By playing our joker we scored another four points which means that we’re on 22 against Fredrik’s 25, with Osian in third on 15. So all in all it was as good a start to the season as we had hoped for and it sets us up nicely for round two.”

Tom went on to thank: James for his continued support, the Dom Buckely RSC team for providing such a competitive and reliable car, DMACK Tyres who’s products worked really well in the changing conditions and also Walero UK, Atech Racing and the Trefeddian Hotel for their support.

Tom and James now prepare for the next event, the Pirelli Rally that takes place on 29th & 30th April, when they swap to a New Generation Hyundai i20 R5 to give the car its first ever competitive outing in a British Rally Championship event. 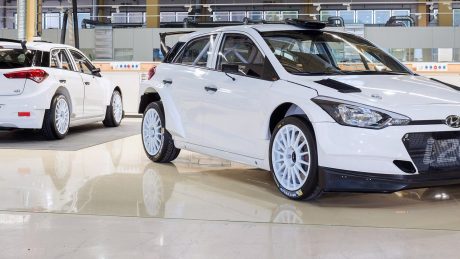 It has been confirmed that Tom Cave will drive an i20 R5 on the forthcoming Pirelli International Rally, round two of the Prestone MSA British Rally Championship. The event, that takes place on 29th & 30th April, marks the car’s first ever appearance at this level of competition in the UK.

“It’s great to have the opportunity to debut this car in a round of the British Rally Championship”, said Tom. “The Hyundai has previously been seen on rounds of the WRC – including Rally GB – and other overseas events, so I am delighted to be the first drive it in the BRC.”

The New Generation i20 R5 is to be supplied and run by an experienced private Hyundai Motorsport customer team, who compete regularly in national championships across Europe. Tom is scheduled to carry out a substantial test in the car ahead of the Kielder Forest-based event.

“Having been developed throughout the course of 2016, the i20 R5 has already proved it can be competitive and, because it’s the first time for the car in the BRC, I’m expecting it to attract a lot of attention. I’m therefore intending to do the best job I can for everyone involved and to show the car in the best way possible.”

It was announced last week that Tom will contest the first round of the British Rally Championship – this month’s Border Counties Rally – in a Dom Buckley prepared Fiesta R5. The drive in the Hyundai is currently just for one event and therefore the 25 year-old Welshman is hoping that a good result and the exposure surrounding it will give momentum to the rest of his season.

“Having finished second last year, the aim is to be able to continue in the BRC for the whole season, as I believe I have an opportunity to fight for the title. I therefore hope that with a good result, the drive in the i20 will lead on to other things – hopefully in another Hyundai!”

Tom will be partnered this season by his co-driver from 2016, James Morgan and said: “I’m delighted James will be joining me again. Whilst the team and the what I’m driving will change this season, it’s great that with James the consistency will be maintained inside the car.” 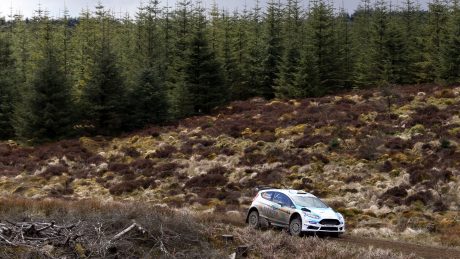 The latest high-profile name to sign-up to the Prestone MSA British Rally Championship in 2017, Tom’s return to Britain’s premier rallying series will see him pilot a Ford Fiesta R5 prepared by Dom Buckley Motorsport alongside co-driver James Morgan on the Border Counties Rally.

Last season’s runner-up has committed to the series once again as he goes in search of his first four-wheel-drive win in the BRC. The 25-year-old is fired-up ahead of the first round after a confidence building 2016, taking four podiums and being the only driver – other than WRC star Elfyn Evans – to burst through the 100 point mark in the standings. With Evans graduating to the world stage, the path is now clear for a new champion to be crowned.

“Last year was very successful,” enthused Tom. “To finish second behind Elfyn was the best I could have hoped for and beyond all expectations. This time last year it was a case of learning everything – a new team, new car and new co-driver. We couldn’t live with Elfyn and Fredrik [Ahlin] initially but, as I gelled with the Spencer Sport team and James, the results started to come. By the Scottish we really started to get into our stride and then showed good pace right up to the end of the season.”

The Aberdovey-based driver knows the Fiesta R5 well and believes everything is in place to mount a strong charge from the word ‘go’ in Scotland – with the series blasting off on the 17/18 March.

“I think I can fight at the front once again. I’ve have not competed on a full event since September but with what I’ve done since it felt like I had never been away. I feel comfortable and ready to fight on the Border Counties. I have done a lot of rallies in the Fiesta R5 and believe all the ingredients are there to compete for a win.”

It’s a new year and new challenge for Tom, who is leading the attack for Dom Buckley Motorsport in the BRC. Tom had a successful year last year and appreciates the backing he enjoyed from Spencer Sport throughout 2016.

“I would like to thank Spencer Sport for all their support last year. To work with Charlie and Jamie Jukes and help bring a new team into the BRC was a great experience. To take four podiums together I think shows the level of success we achieved, but unfortunately we couldn’t put a package together this year. I wish them well for the future and I look forward to the new challenges this year will bring.”

Tom has been a long-term supporter of the British Rally Championship and is eager to shine on some of the world’s best stages.

“It looks like the BRC will be well supported once again and it’s an excellent proving ground for young drivers. Elfyn has proved that. The level of competition this year is destined to provide some great battles, so I’m delighted to continue to be involved.”