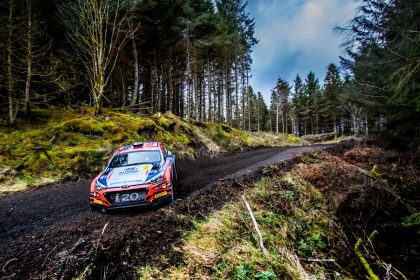 Having led the event from the start, Saturday’s Cambrian Rally saw Tom and his co-driver Dale Furniss having to call on their skills and resolve when a broken wheel and the subsequent time lost on stage three, forced them to fight back to go on to score a hard-earned sixth place.

It wasn’t the result the two Welshman had been looking for to kick start their 2020 British Rally Championship campaign, but they came away from the event consoled in the knowledge that the pace is there to win when the opportunity and better fortunes allow.

The Llandudno-based Visit Conwy Cambrian Rally featured six North Wales forest stages plus a run on asphalt around the Great Orme headland – an area that Tom and Dale know well having been rewarded with success in November when they finished 11th overall and top non-WRC registered crew on the Wales Rally GB.

Using his knowledge of the area, combined with his confidence in the PCRS-prepared Hyundai i20 R5, Tom was fastest out of the box and after stage two led the event by a margin of 1.7 seconds from his perennial rival, Matt Edwards.

With the scene set for an intriguing battle for the remainder of the rally, stage three proved pivotal, when Tom and Dale clipped a rock with the rear, nearside wheel. The impact was enough to break the alloy and puncture the tyre, forcing them to stop at the side of the road to change the wheel.

Although carrying out the running repairs as quickly as they could, nearly four minutes were lost. Consequently, the only option now was damage limitation and get to back on the trail to score as many points as possible.

Now in tenth place, Tom and Dale picked off the cars ahead of them stage-by stage. After setting another fastest time on the seventh and final stage of the day, Elsi – a forest Tom knows well, following impressive runs over its testing seven miles in the past two Rally GB outings – the Welshmen crossed the line in sixth place. Clearly, whilst it wasn’t the result they had hoped for, both were satisfied that given the circumstances, it was the best that they could have done and that championship points were now on the board.

“I was pleased in the knowledge that we were on the pace right from the start. I felt at home in the Hyundai from the word go. The PCRS team know how to build a reliable car and set it up just how I like it. So, even though the competition was tough, I knew we had a great chance of a top result.

“It therefore came as quite a blow that when we clipped a rock on the outside of a fast right-hander, the consequences were as severe as they were. All we could do from then on was exactly what we did and bring home as many points as possible. We have the team, the car – in fact the whole package – to challenge for the British title, so we’ll now re-group and focus on the next event. Thanks go to Dale and the team for a job well done and our sponsors for their invaluable support.”

The second round of the British Rally Championship is the West Cork Rally. Having scored a fiercely fought victory last year, Tom will be gunning to do exactly the same again on 14th & 15th March. 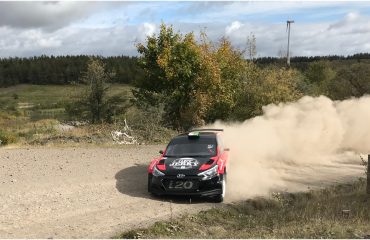 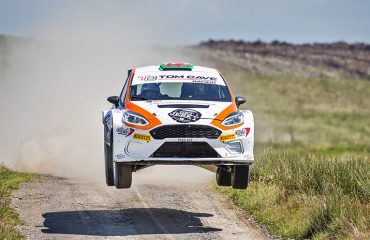 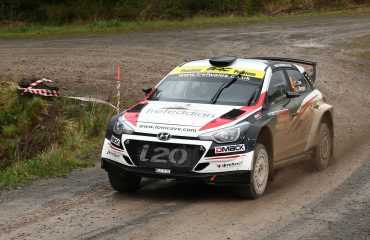