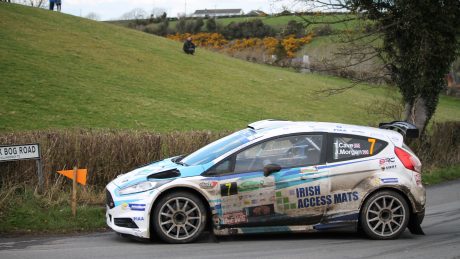 After returning from Belfast, I somewhat felt relieved to come away from the Circuit of Ireland rally with a good points haul. If you followed the rally, you would have heard of the endless changeable weather, which the stage conditions, incredibly tricky even on super soft Michelins!

There was a high attrition rate. Even from the start of the qualifying stage on Thursday, two cars had binned it. The stage was horrendous; I’ve never driven on a stage so slippery and unforgiving before.  Mud was an issue. It lasted pretty much from the first corner till the last corner.

I struggled. I will be honest, the feeling wasn’t there. I wasn’t at one with the car and I really couldn’t find a decent rhythm! This was going to be a tough weekend. I calculated after the qualifying stage that I was losing 1.5 sec per km to Elfyn (Evans) who was fastest on the qualifying stage.

Then I worked out I would be approx. 30 secs off him just on the first stage alone on the Friday morning.. I was right.

At the end of the first stage I was confronted by Colin Clark & the rest of media crowd from Eurosport. I glanced across to the timing board where the marshal put up our time and I was pretty much 30 secs off Ellyn’s time! And there was another 150km to go…At that point I knew I was in for a tough weekend.

That completely deflated me to be honest.  I guess that was noticeable even at the end of SS1 as Colin Clark rightly said after he saw me in the regroup zone at the Bushmills whiskey factory after the first loop of stage. He said my face just dropped at the end of that stage. I guess it’s only natural when you want to be competitive and you’re not!

We ended the first leg languishing down in 12th overall. We couldn’t amend any springs or considerable setup changes during the day because we had no main service and remote service, which means we are only permitted to change parts that are kept in the boot of the rally car.

Of course, you wouldn’t have set of spring rates or a haul of anti-roll bars in the boot because it’s all weight, so I had to be patient with the car and wait until we got back to Belfast on Friday evening before we could do anything with the car. I was glad to see the back of that day.

When I got back to service I requested to have my in car from day 1 from Hayfisher TV who supply the in car cameras so that evening I got back to hotel and sat down and watched every stage in detail looking for answers. I didn’t get to bed till 2am and I was determined to make the best of leg 2. And show some spark…

We left service Saturday morning, feeling positive. I made a few changes to the car after consulting an M-Sport Engineer and we discovered two areas that weren’t quite right with the cars setup. So we managed to make some amendments in the search of a better day.

On the road section out to the first stage of the day, I discovered we had a gearbox issue, oil was leaking really bad from the side of the box. James and I made road side repairs to insure we didn’t lose any more oil. I felt the gearbox getting tighter as the morning went on. Much to my surprise we got through the loop driving sympathetically, ensuring the gearbox wasn’t getting any abuse.

I couldn’t push the way I wanted on the first loop but I was much happier in the car after the setup changes we made, and we were going in the right direction which was a relief.

After passing Ahlin crashed out on the Bush Mills stage, I knew all I had to do was just get to the finish. With Evans, Cronin, Ahlin, all out of the rally, the main championship contenders for me heading into the next event haven’t scored a point, where we came away with 12 points! In the end the weekend wasn’t soon bad after all, I’m glad I kept my head when the going was getting tough in the car.

Thanks to James for putting up with me… And thanks to Spencer Sport lads for getting the car to the finish!

Next up will be the Carlisle Rally so it’s back to gravel at the end of April.