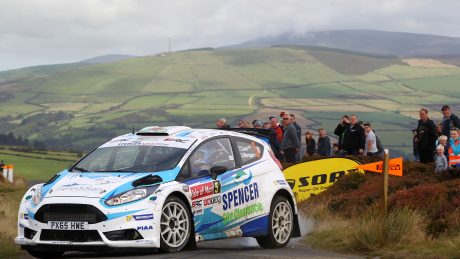 Tom Cave, together with co-driver James Morgan, delivered a perfect performance on the Rally Isle of Man to secure second place in this year’s MSA British Rally Championship.

From the moment the seventh and final round of the season started on Thursday (15th September) evening through to its conclusion on Saturday afternoon, Tom from Aberdovey and James from Hirwaun never put a foot wrong and reaped the rewards of their efforts, not just for this event, but for the whole of the 2016 season.

With fellow Welshman Elfyn Evans claiming the BRC title on the previous round in Northern Ireland, Tom went to the rally knowing exactly what he had to do in order to retain his second place in the championship.

Goal number one was to finish – not an easy task over a total of 167 competitive miles split into 20 stages on roads that have a reputation for the demands they put on cars and crews. Goal number two was to score enough points to stay ahead of the four other crews that could challenge for the runners-up spot. But that wouldn’t be easy either, as double points are awarded for the last round of the championship.

Focused and determined, Tom set off for the first of Thursday evening’s three stages with the aim of staying out of trouble, but at the same time not lose time to his rivals. And that’s exactly what he did, getting back to Douglas for the overnight halt, not only second in the BRC standings, but second in the overall event behind Evans.

Friday was to be the longest day with 11 stages planned. Throughout it, James kept a close eye on the stage times of the crews that mattered and Tom adjusted his pace accordingly. Another faultless performance by car and crew meant they skillfully maintained their BRC position by the end of the day and now held third place, with Manxman Mark Higgins – who wasn’t registered for the BRC and therefore not taking any points – now heading the field.

For Tom and James and the Spencer Sport team, they knew that Saturday’s six stages were to be the most important of the season. The team gave Tom the best car they could, whilst inside the Fiesta it was a case of 100% concentration and no mistakes for the remaining 60 stage miles. But Tom and James were in the zone and an exemplary drive on the final day saw them cross the finish line at the TT Grandstand having maintained position behind Evans – who had retaken the lead – and Higgins.

After the rally, an elated Tom said: “I’m really pleased we were able to maintain such a good pace throughout the rally and I was able to push when we needed to push to stay ahead of our rivals.

“Second in the BRC is the best outcome we could have hoped for, not just for this event, but for the season overall. We always knew it was going to be tough to beat Elfyn and we were up against so many top drivers. But I’ve had a great team around me and that has made such a difference.

“Not only have Spencer Sport given me a car that’s performed faultlessly throughout the year, but James’ and the team’s support and commitment to what we needed to achieve has been incredible. Testimony to this is the fact that we are one of only two crews in the whole of the British Rally Championship field that has scored points on all seven rounds.

“I would therefore like to thank James for his work inside the car, the team for their work outside it, plus all of my sponsors and supporters, including the Trefeddian Hotel, Michelin and team boss Jamie Jukes for letting me drive his car! It’s been a fantastic season.”