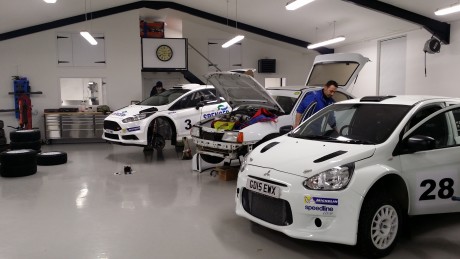 Spencer Sport is preparing to launch its assault on the first round of the MSA British Rally Championship – the Mid Wales Stages – which takes place this coming weekend, 5th & 6th March.

Spencer Sport’s cars and crews are:

It’s been a race against time for the Spencer Sport team following the first outing for it’s new Fiesta, after the car plunged off the road and rolled down a bank whilst Tom Cave and James Morgan were on the first stage of the Red Kite Rally last Sunday-week. Whilst both crew members walked away relatively unscathed, the Fiesta has needed major surgery and, after recovering the car the very next day, the Spencer Sport team has worked tirelessly to repair much of the body damage before the car was sent to M-Sport on Sunday. It is now being fully restored in readiness for this weekend’s event.

Tom and James will start as car #4 in the BRC 1 category and are labeled as one of the front-runners in the battle for this year’s British title.
“It’s great to be part of the new-look BRC, with a competitive car and a strong team behind us – plus, it’s even better that the season starts with the Mid Wales Stages, a relatively local event for me”, said Tom. “I have to admit that, after what happened on the Red Kite Stages we’ve had a difficult few days, but James and I have put that behind us now and intend to start next weekend’s event aiming to win – as we always do. The team have been working really hard to get the Fiesta ready and I’m confident that, as soon as we’re in the car, things will click straight back into place.”

Osian Pryce has admitted he is excited by the prospect of getting back into an R5 specification Mitsubishi Mirage after being one of Spencer Sport’s test drivers last year. Together with his regular co-driver Dale Furniss, the Welsh pair have been seeded #1 in the BRCB (National) category and will be driving the same car that was used by three-times Finnish Rally Champion Jari Ketomaa to score fourth place in the snowy conditions of the Vaakuna Rally in Finland last weekend.

“It’s good to be back in the Mitsubishi” said Osian. “After testing it and then being unable to finish the Cambrian Rally last year, I feel I have some unfinished business to attend to. The car is fantastic to drive so I must admit that I’ve not looked forward to a rally as much as this for a long time and I’m determined to do the best job I can.”

Fresh from their impressive performance on the Red Kite Stages when they finished fourth overall, Jamie Jukes and Dave Williams are also looking forward to getting back in their Mitsubishi. Running three cars behind their teammates in the BRC B category, they are hoping to continue from where they left off in what is Jamie’s first full season in a four-wheel-drive car.

“Moving from a two-wheel-drive car to the R5 specification Mitsubishi is quite a step for me, so I was very pleased with the way things went on the Red Kite Rally”, explained Jamie. “The Mirage is such a great car to drive and, if we have a good clean run, I think we should be in with a chance of a podium in the BRC B category – albeit we don’t expect to be on the pace of our teammates!”

Spencer Sport, in conjunction with Mpart AB – the Swedish company responsible for designing and building the R5 Specification Mitsubishis – will be looking after a third Mirage on the event, the O’Leary’s Sports Bar supported car driven by Robert Blomberg with co-driver Lars Andersson. The Swedish pairing will start from #2 in the BRC B category.

The Mid Wales Stages starts and finishes in Newtown and features two stages on Saturday evening with a further four on Sunday, which combined, provide a competitive distance of 69-miles. 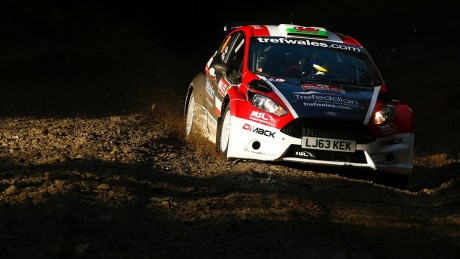 Spencer Sport is pleased to confirm that it will field three-cars for the Mid Wales Stages, the first round of this year’s MSA British Rally Championship.

In October 2015, Spencer Sport announced that it had been appointed as the official distributor in the UK and Ireland for the exciting R5 specification Mitsubishi Mirage. Consequently, while it awaits news of the car’s global homologation – and with the British Championship recently deciding that it will not accept cars with a National Homologation in its BRC1 class– the company will start the season with two of the Swedish-built Mitsubishis running in the National Rally Cup category: one driven by talented Welsh youngster Osian Pryce and the other by Spencer Sport owner Jamie Jukes.

The team is also pleased to reveal that it has just agreed a deal to purchase a Fiesta R5 Evo to contest the BRC 1 class alongside to its two-car Mitsubishi campaign. The Fiesta will be driven by Tom Cave, the third Welshman in the team bringing with him a wealth of experience from his previous BRC and WRC outings. He will be co-driven by James Morgan, who is also from Wales and another regular WRC competitor.

“For the past few months we have been working hard behind the scenes to bring a professionally run and high profile team to the British Rally Championship”, explains Spencer Sport team manager Charlie Jukes. “We were initially planning to enter the two Mitsubishis in the BRC1 class, but without the right type of homologation at this stage, we have had to change our plans for the start of the season.”

The Spencer Sport team is confident that with a strong line up in both series’ it can challenge for podium positions and outright wins, as well as the MSA British Rally Championship title.

As a shakedown test before the season gets underway, the team will enter the Llandovery-based Red Kite Stages Rally on 21st February.

Further announcements about Spencer Sport’s 2016 rally campaigns, its commercial partners and future plans will be made before the Mid Wales Stages on the 5th and 6th March, the first event in MSA British Rally Championship’s seven-round calendar.